We woke up early on Saturday to meet our guide who was taking us on a tour of Capri.  After meeting up with her, we walked down to the marina where we were to catch they hydrofoil ferry that would take us to the island.  The boat ride on a hydrofoil is about 30 minutes or so. 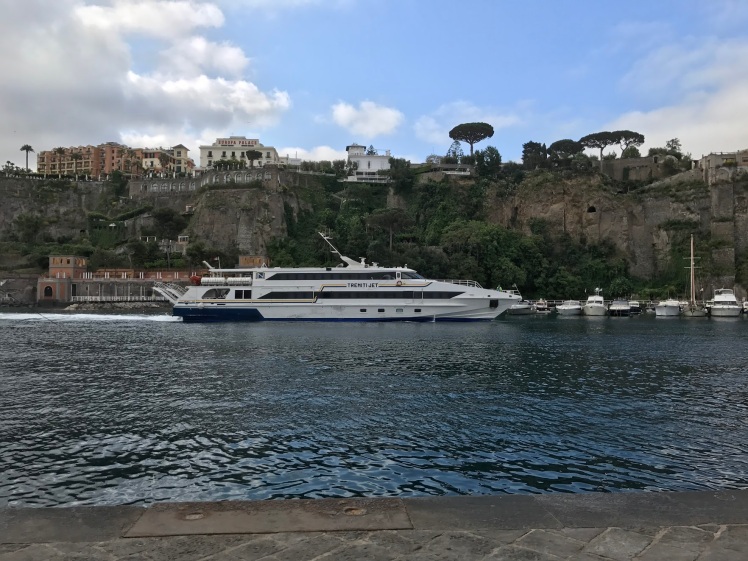 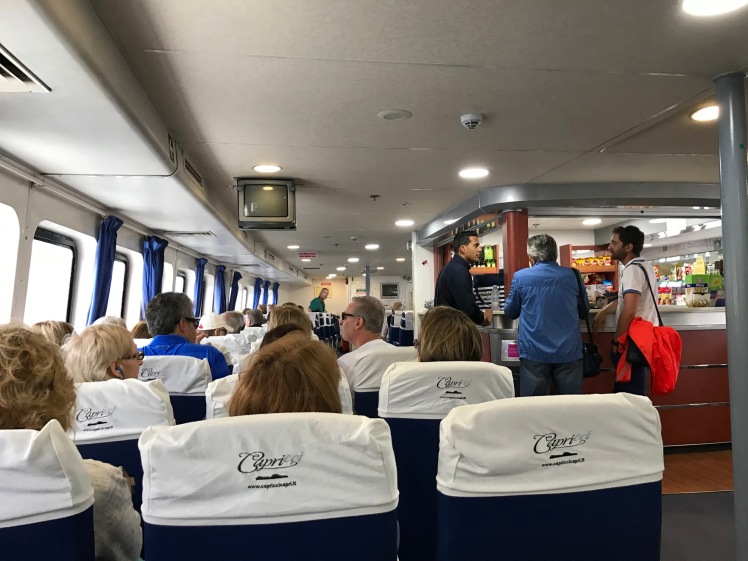 Once we arrived at the island, the first thing we did was take the funicular up to the top.  This funicular is on a pulley system so the 2 cars pull each other up and down the mountain.  There is 1 spot on the trip where the cars pass each other! 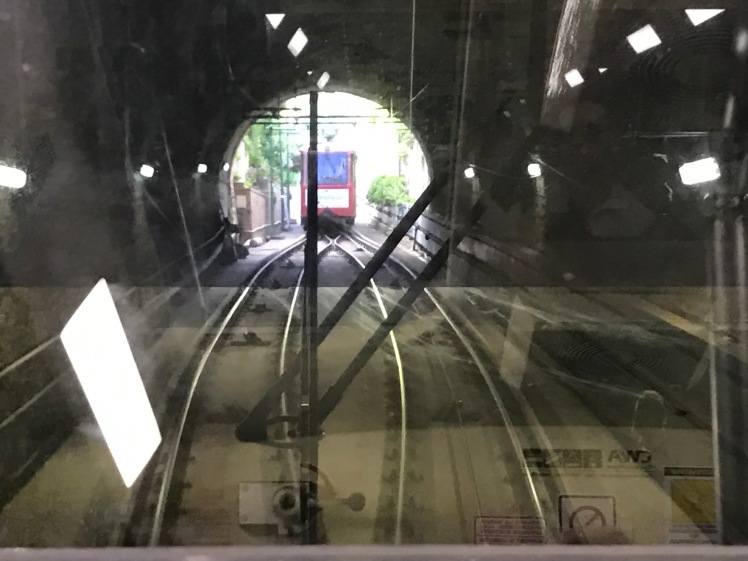 Once we made it to the top, we had amazing views!  It was a bright, sunny day. 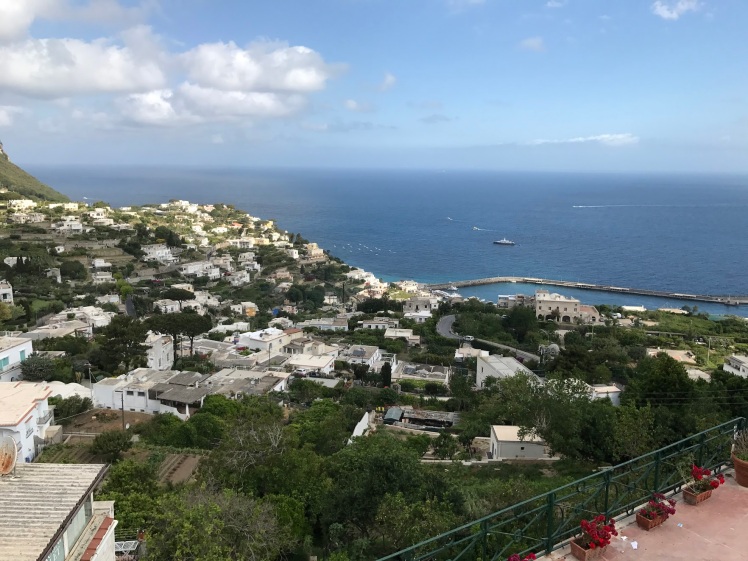 The clock tower in the town square. 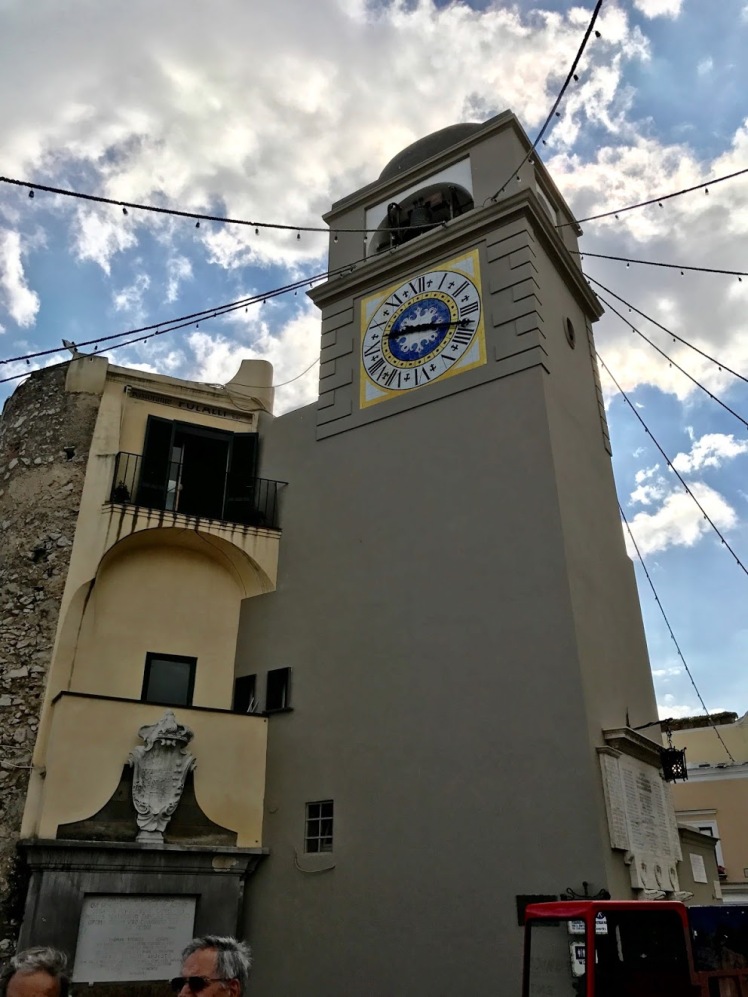 It was an awesome time to be there because the flowers were in full bloom and looking beautiful!

This place was a ruin-turned-high school!  There are 2 high schools on the island, and if the children don’t want to attend one of those, they have to move to the main land and attend school there.  Space on the island is at a premium because there is no more room to build anything. 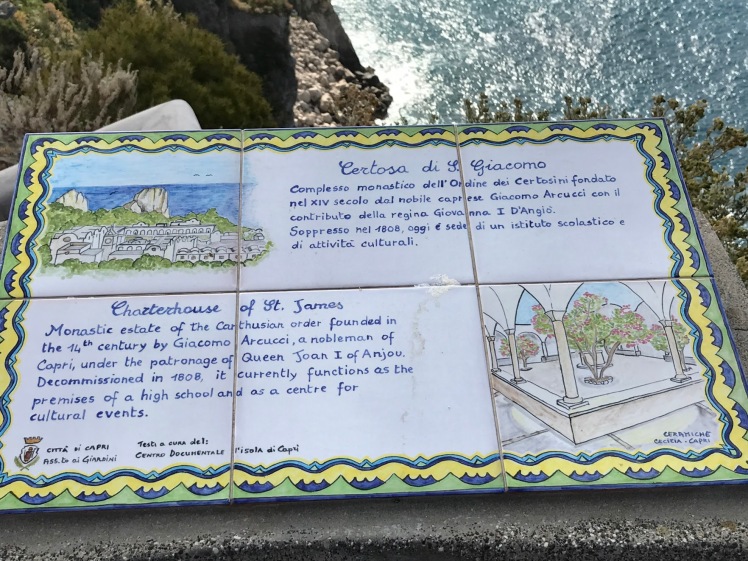 We stopped by a factory where they make perfumes.  And Littlest decided she just HAD to have some!  She chose a pretty citrus scent. 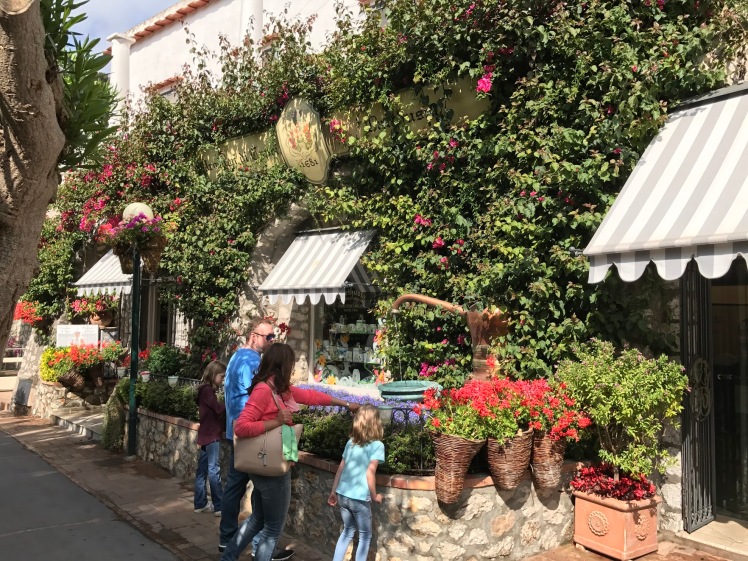 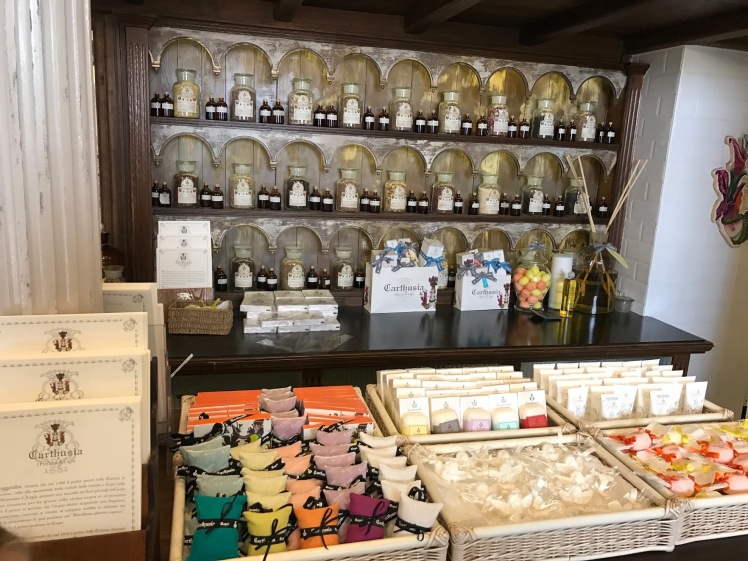 Continuing on our tour, we came to the Garden of August (Giardini Augusto). The grounds were just gorgeous. 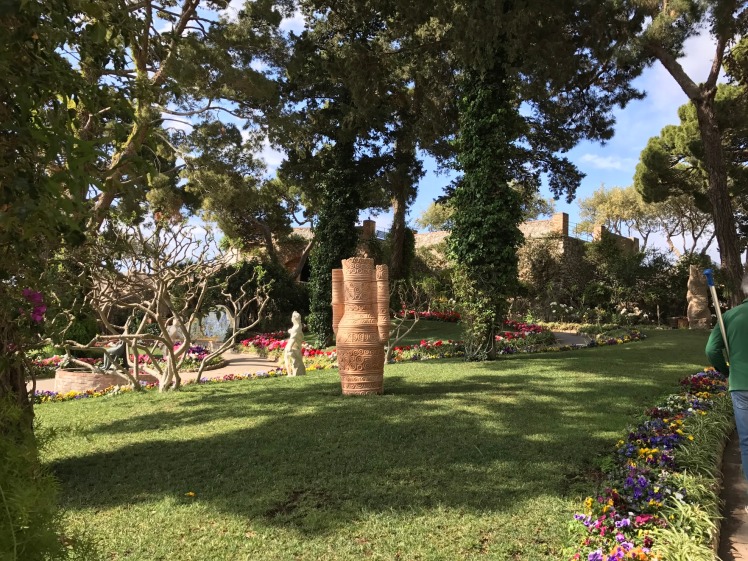 And the views were even more stunning!

The rock formation in the water behind us in the above picture is actually 3 separate rocks.  Boats are able to go between them.  On the 3rd furthest rock, is the only place (in the world supposedly) where these blue lizards live! 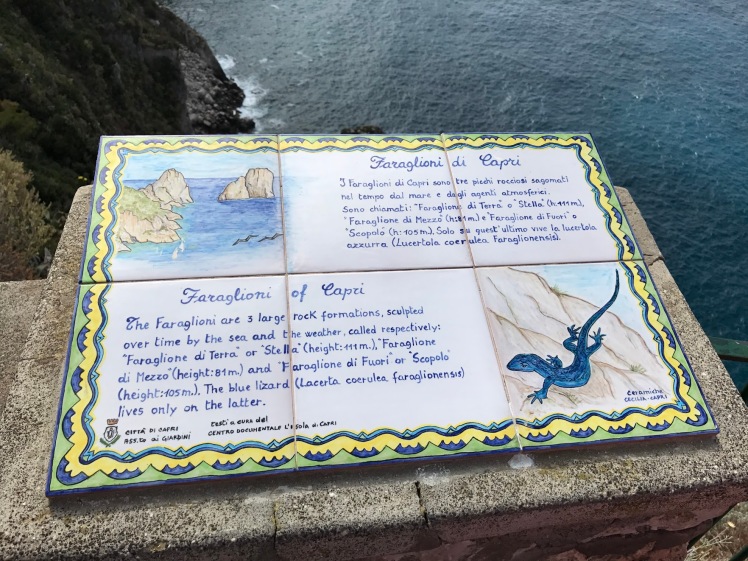 After touring the gardens, we walked through the very elegant and high end shopping district. 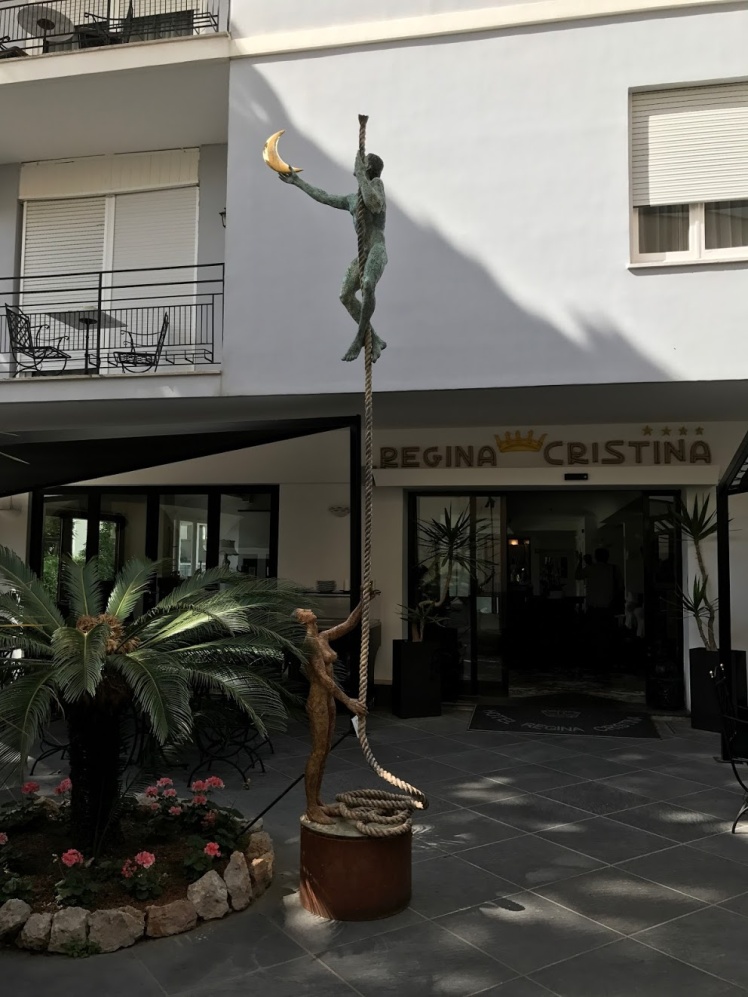 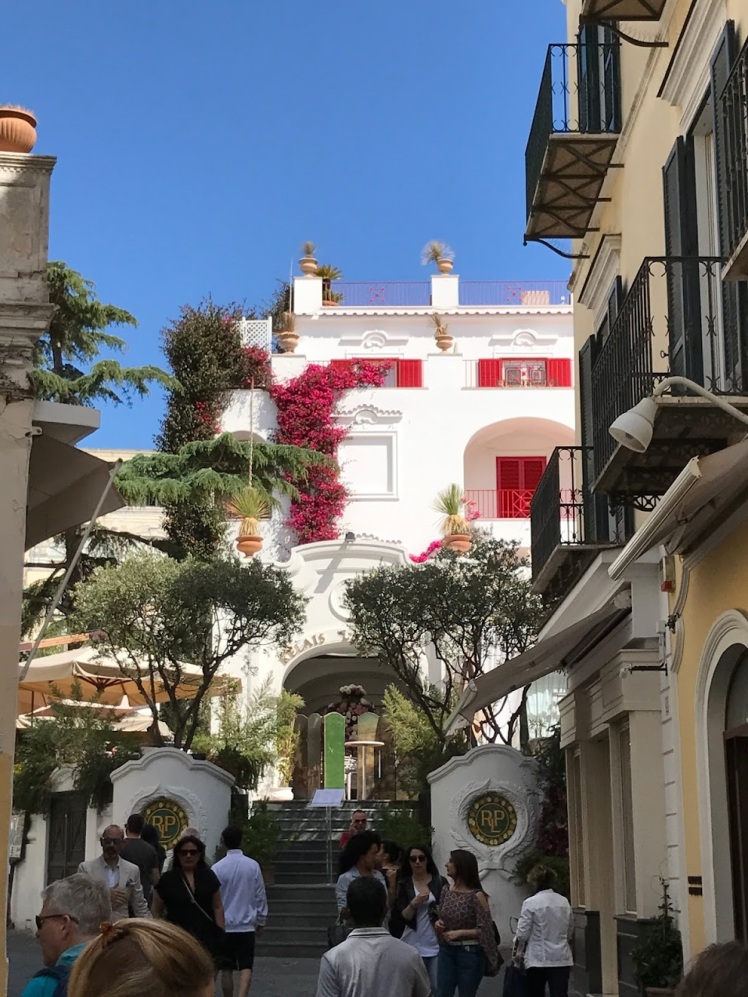 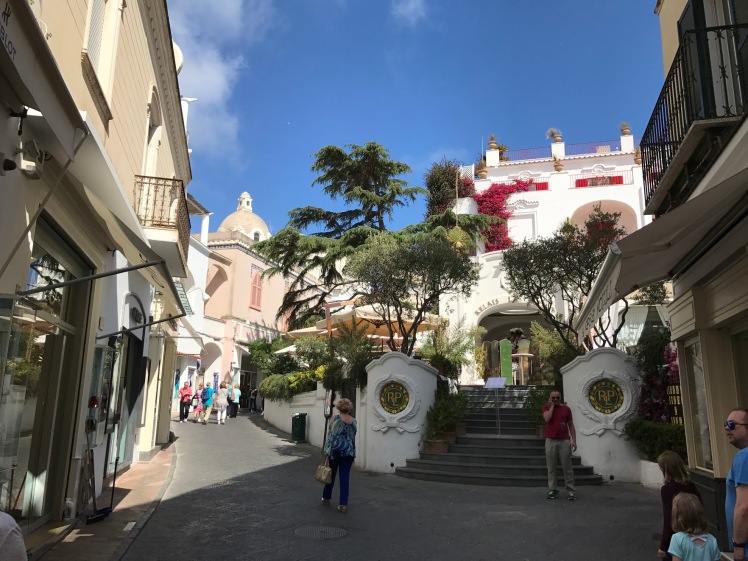 Just check out this fashion!! 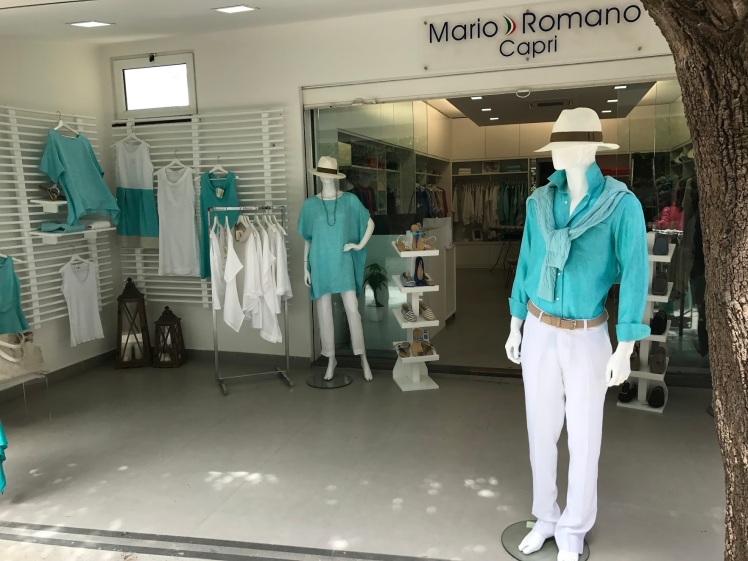 Our next stop was to ride in a convertible vehicle further up the mountain to Anacapri via the Mama Mia Road!

Keep all hands and feet inside the vehicle!!

This is called the Mama Mia! Road….and for good reason!

Once we arrived in Anacapri, we took a single-person chair lift to the highest point on the island – 589 meters (1,932 feet) above sea level.  Oldest rode in front by herself, Littlest rode with MyMan, and I brought up the rear.  I thought I would be more nervous because of my fear of heights – but I wasn’t nervous at all, and thought it was great fun! 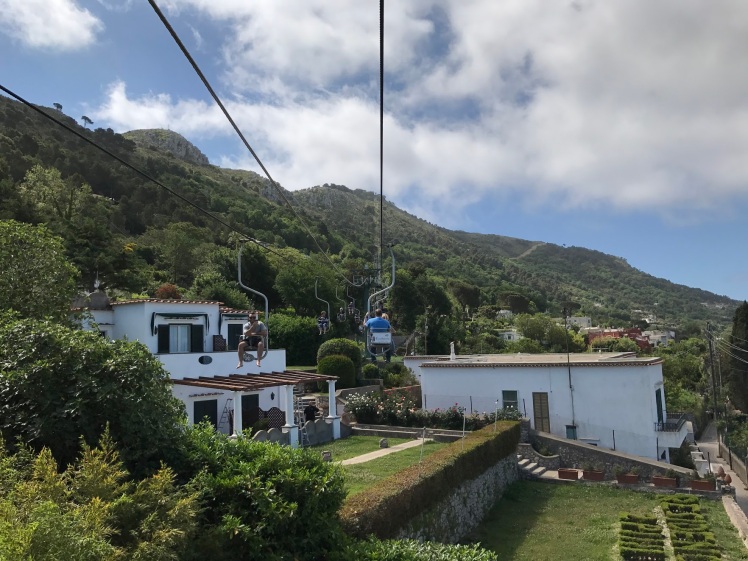 Some ruins dotted the landscape here and there…can you spot it? 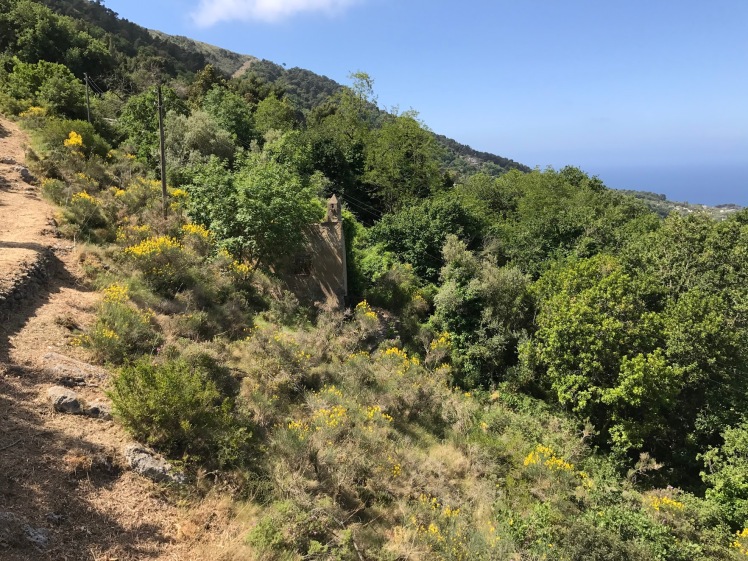 The land was terraced and farm along much of the mountain side, and farmers were tending to their crops. 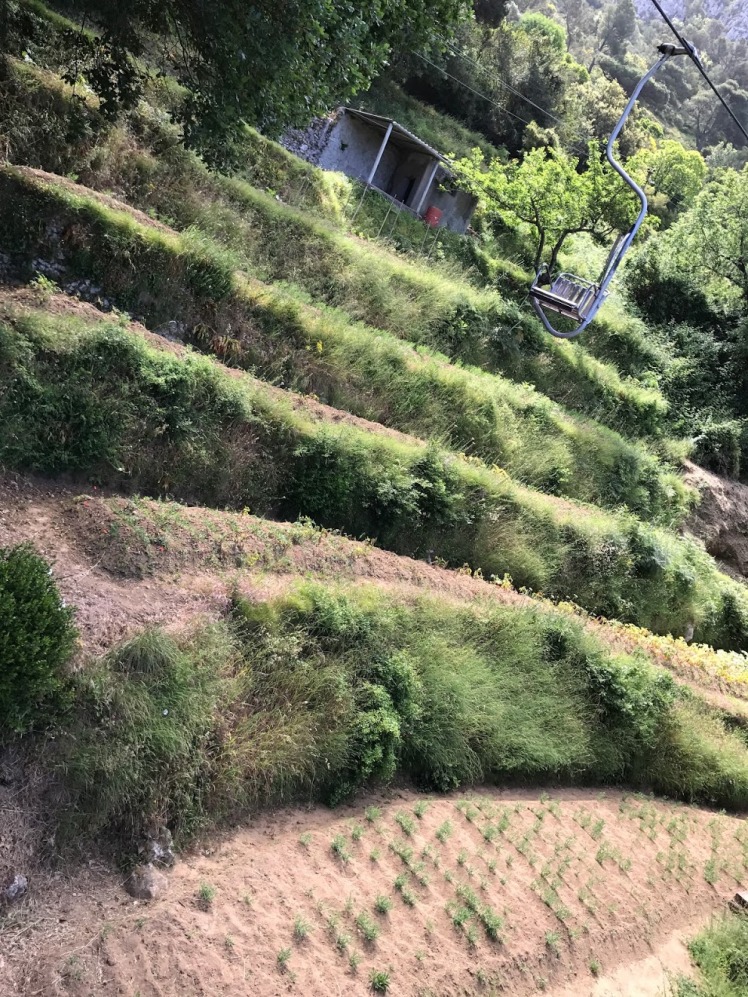 At the top, we walked around for a bit and just enjoyed the magnificent views. 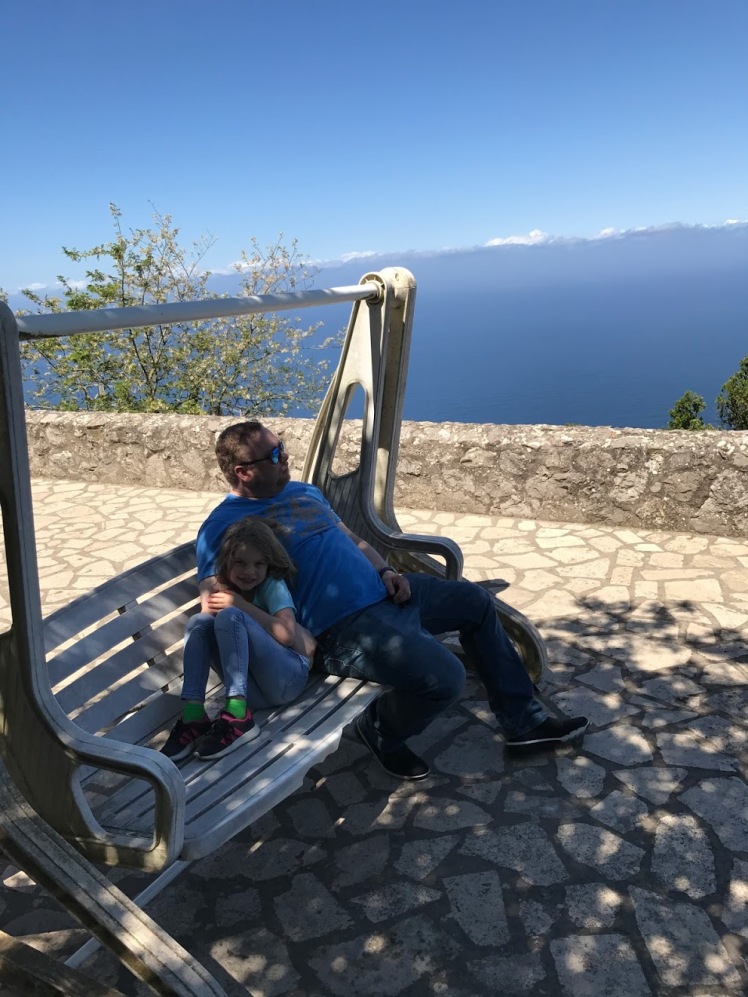 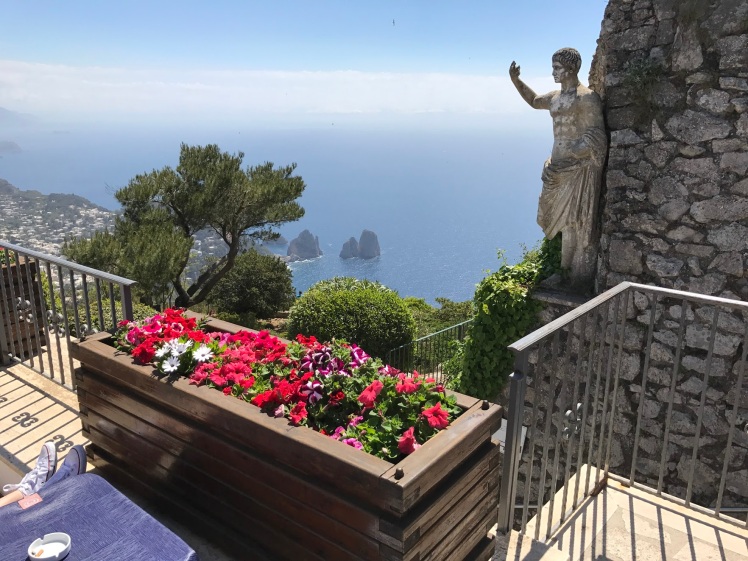 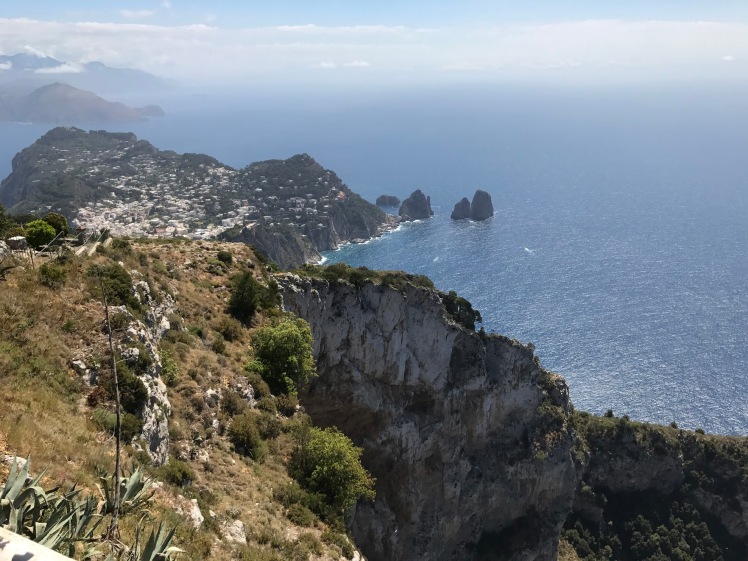 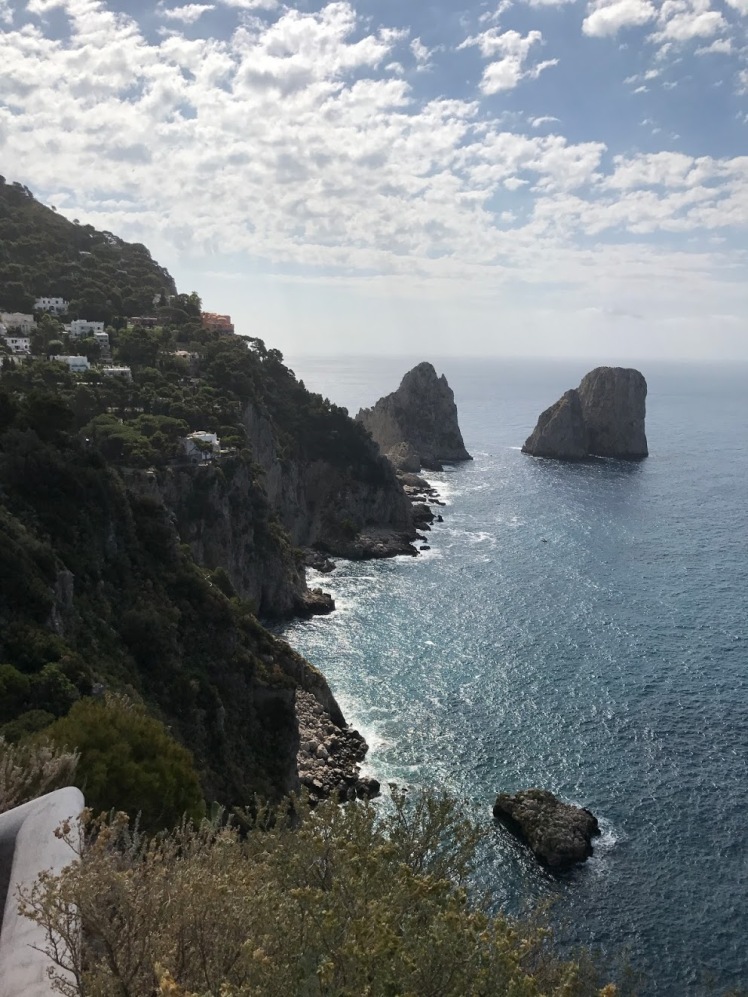 Then we headed back down the mountain.

Once back down, we walked around the town of Anacapri enjoying the scenery, beautiful flowers and endless views of Capri down below. 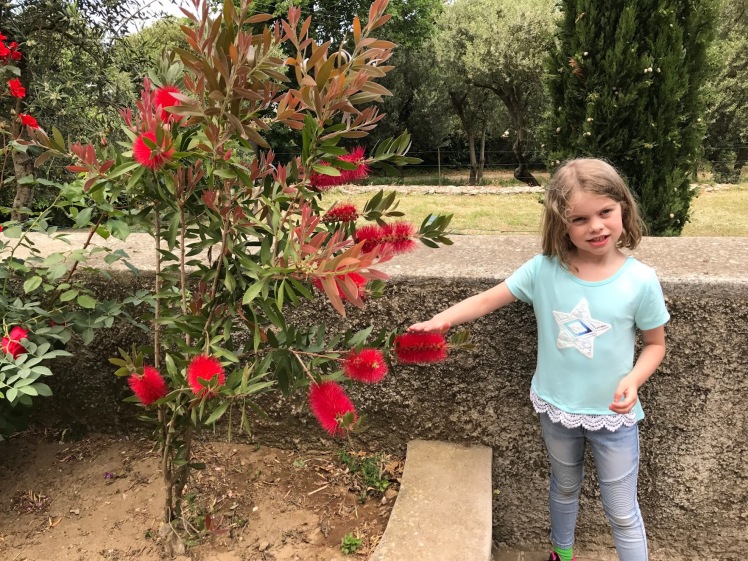 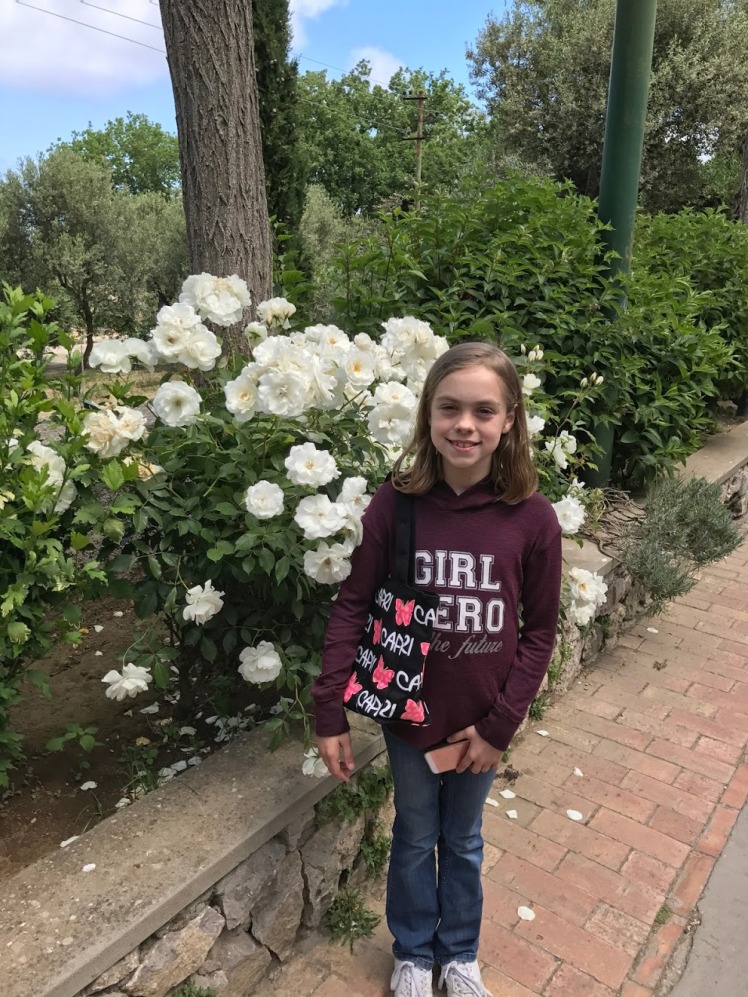 Then we headed back down the mountain towards Capri for the rest of our tour.  We were supposed to go to the Blue Grotto, but it’s always a risk because it is only open about 1 day out of every 10 due to how the ocean is behaving.  The opening is approximately one meter high at the lowest point and two meters wide, and you have to time going in based on the waves!  This day, the ocean was NOT behaving (and hadn’t been for several days) and thus the Blue Grotto was closed because the opening was literally underwater!  So instead, our guide set it up for us to have a longer boat tour around the island.

And while we were not able to go into the Blue Grotto, we were able to see some other grottos! 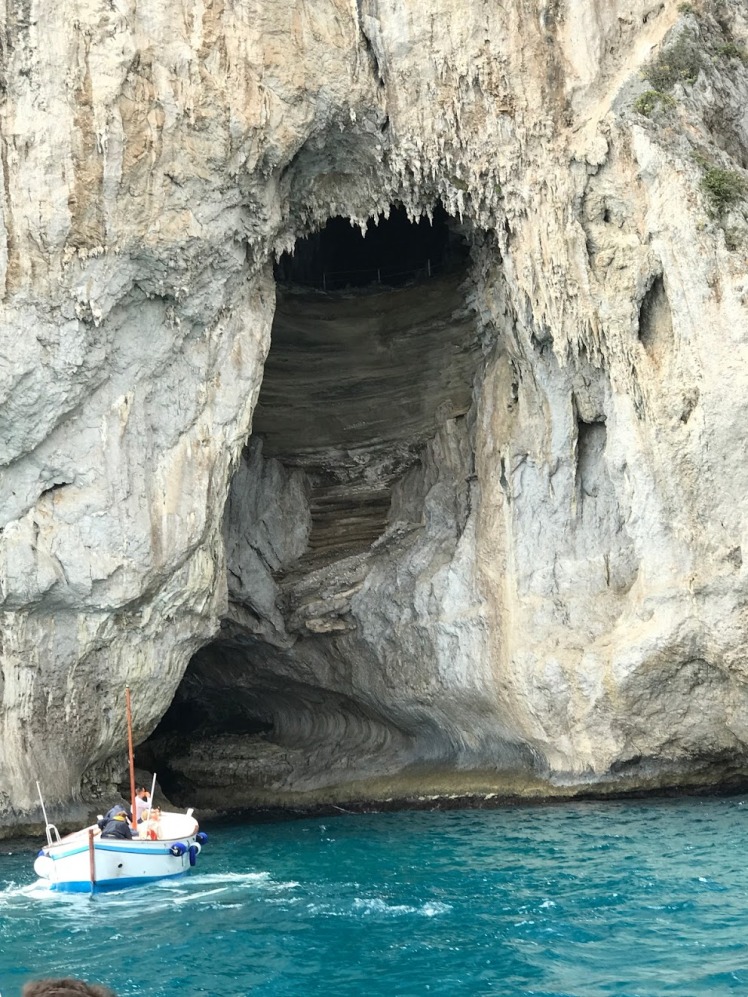 There are some very talented skippers and captains to be able to get as close to these rocks as we were! 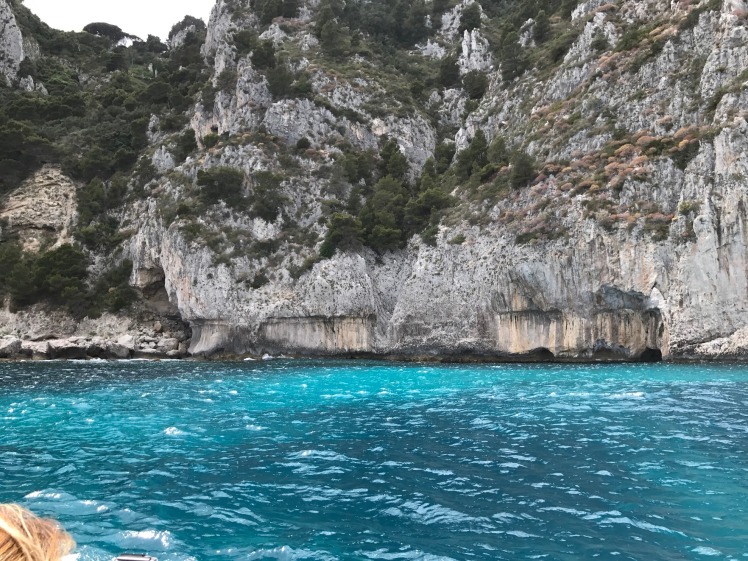 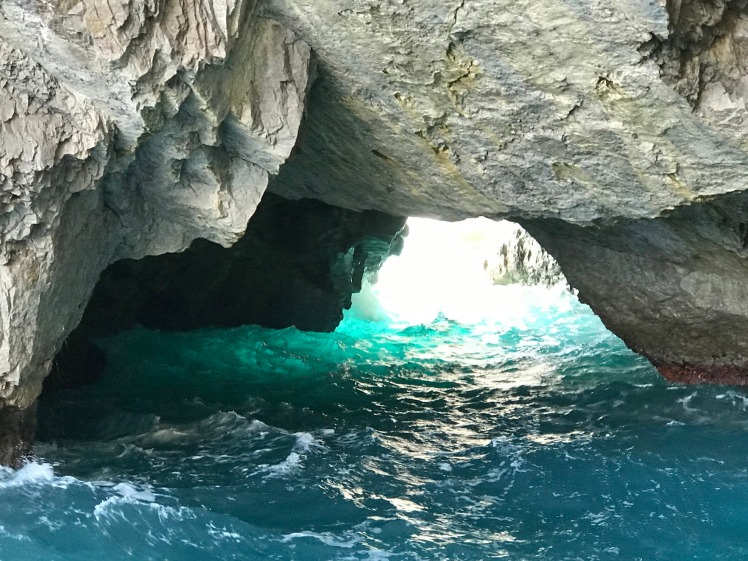 Our guide had told us the best place to sit on the boat – and being first in line, we got the good seats!

We had a wonderful day on the Isle of Capri.  Stunning views from above and on the water.  Definitely would recommend going to Capri if you are planning on going to the Amalfi Coast!