I had our final guided tour with Paris Muse booked for the Louvre Tour.  We were to meet our guide under The Arc du Carrousel.  Just look at the detail in the ceiling of the arch… 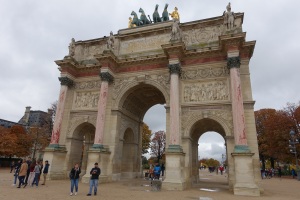 It was a cloudy day, so I’m glad the weather held off until we were on an INSIDE tour!  It was really interesting seeing the outside of the Louvre.  Because there it was….the pyramid!!!  Some Parisians despise it for it’s modern style, and others love and embrace it.  I have to say, while standing outside the Louvre, it does look a bit odd and out of place.  Like it just doesn’t quite fit in.  And the whole time I was outside looking at it, I kept being reminded of The Da Vinci Code movie with Tom Hanks.

But once you go in, and see the pyramid from the inside….it looks rather amazing!  While on the ground level, it’s hard to imagine just how MUCH is underneath your feet, and you don’t even realize it.

I mean, this is 3 stories of architecture underneath the pyramid!! 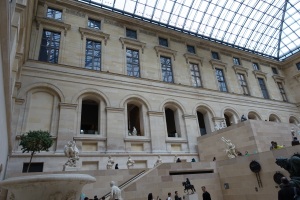 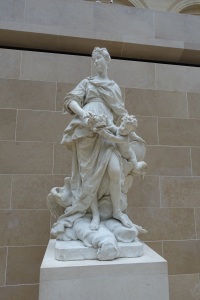 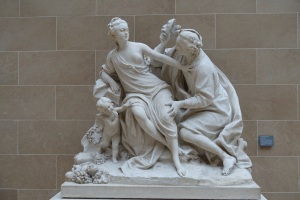 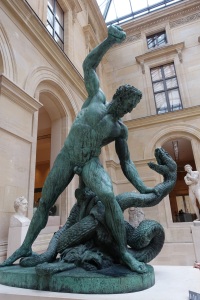 Our guide was Mary, and she was awesome.  Her background was in architecture, and it was interesting getting her perspective on various types of buildings.  She had 2 grown girls of her own, so she was able to relate to my girls pretty well!  The statues in this room were so big!  It’s hard to fathom creating such large pieces out of stone.

This was a carving made in stone of all the laws of the land.  Just look at all those symbols and the entire stone is carved with them! 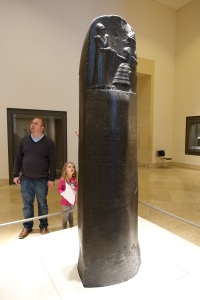 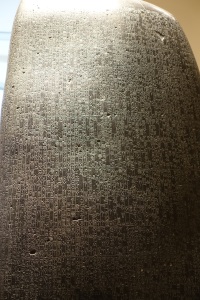 Remember the Modern Art Movement that was going on in Paris through November?  The Louvre participated in it as well.  The purple lighting is part of the Modern Art Movement.   This was a model of the Louvre back when it was a palace and had palace walls going around it.  You can see Oldest standing next to it, so it gives you some scale for the model, then the next picture is what is left of the actual wall that is still standing.  It was neat because the girls learned about masons during our trip, and mason’s marks.  Part of the tour along this part was to find the masons’ marks on the stones.  The girls loved seeing who could find one first! 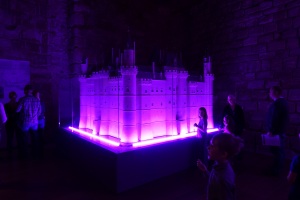 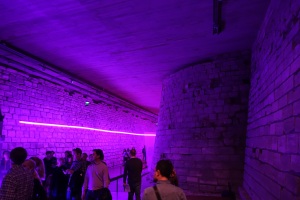 Then we visited the pieces that the Louvre is famous for…

The Mona Lisa.  It was extremely crowded in this room, so we weren’t able to get directly in front of her.  But Mary was able to get us all the way to the front, and off to the side.  We were on the right side of the painting at first.  Mary asked the girls to really look at the Mona Lisa, look at her posture, her stare, her shoulders.  Then we went around and looked at her from the other side, and she changes!  Littlest was absolutely BLOWN AWAY at the concept of the Mona Lisa.  We had to stand there for quite a few minutes, while she ran back and forth from one side to the other watching the painting.

Mary told us that the only reason this statue is famous all around the world is because of marketing.  There’s nothing extraordinary about this particular statue, or the woman herself.  But the way they marketed it, made it extremely famous, and so there you have it…Venus di Milo.  She is sculpted in a slightly different way than what was the norm back then, in that you can see the folds in her neck, and a bit of fatty tissue under her arms.  She was sculpted to look much more realistic. 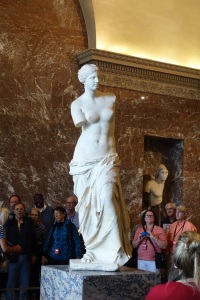 The Winged Victory of Samothrace.  Mary said it was probably one of the most photographed pieces in the Louvre because it’s used in movies, commercials, etc.  It is also the reason behind the Nike swoosh symbol. 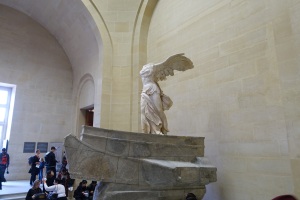 And finally…the Sphinx.  Again there was the Modern Art Movement going on, so the colors were purple.  But it made the Sphinx look even cooler!

After the tour ended, we felt like we could have seen a lot more, but we were beat by then, and we spent the rest of the day back at the apartment.  Everyone was tired, and needed some down time.  We wanted to be rested for our final tour the next day…our day trip to Provins!