Some of the lovely ladies from the Parent’s Association of the International School set up a little walking tour around Breda for the school parents.  It ended up not being the best weather day…a typical Nederlands autumn day of drizzle and cloudy…but the ladies were all very nice, the tour was lovely, and I learned a few things here and there.

Our walk started at the center of the city…Grote Kerk (Great Church) or Onze Lieve Vrouwekerk (Church of our Lady).  Its first stones date back to 1269, and some believe a wooden church stood there prior to then.  It has been refurbished and rebuilt after bombings and decay over the generations, but it’s a beautiful landmark that can be seen from almost anywhere in Breda.  It is also the tallest structure in Breda.

Right next to the church is The Grote Markt.  I posted pics of that not long ago when I visited on market day.  Currently they have a market every Tuesday and Friday morning.  They have had a weekly market in this square for the past 700 HUNDRED YEARS!!  That includes years during war and while under siege.  We were not there on a market day, and it was still rather early in the morning, so it was not bustling like it can be.

Also in the square is the old town hall.  Here is where they tried and hung people who were found guilty.  They would ring the bell at the top of the town hall, and all the people around would come to watch the execution.  Gruesome!

This is the backside of the town hall.

A bit down the lane, and through a passage that’s rather hidden unless you look for it…you stumble into a beautiful garden and residential area.  I believe this is where some of the important political people lived (I missed some of the information because I usually hung back to take photos!!). 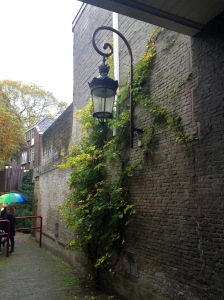 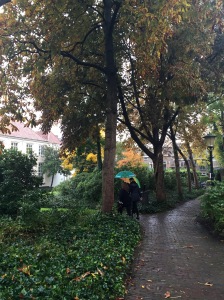 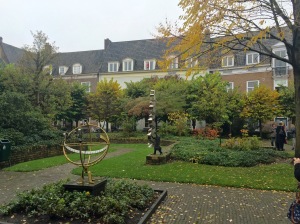 This area is a little residential area that housed people who were hard up and desperate and the nuns from the convent looked after them.  Now it is a small neighborhood where elderly folks live.  It is so beautiful and serene. 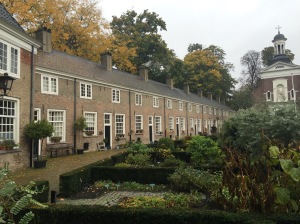 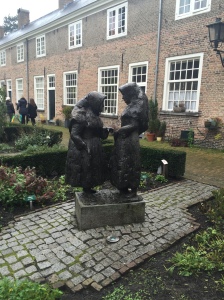 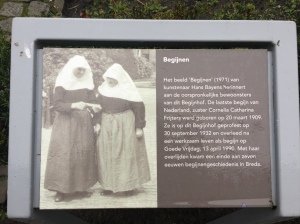 From the plaquard: The image “beguines” (1971) by artist Hans Bayens recalls the original inmates of the Beguine. The last Beguine of Netherlands, Sister Cornelia Catharina Frijters was born on March 20, 1909. She is the Beguine professed on September 30, 1932 and died after a working life as beguines on Good Friday, April 13th 1990. With her death came to an end Seven centuries of history in Breda Beguine. 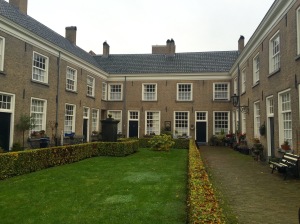 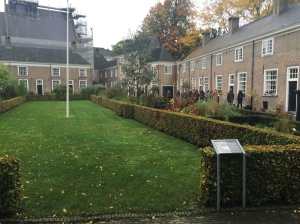 From the plaquard: A pale or pale field is a meadow, which was sure to bleach linen. Because wash for others was also a source of income for beguines, the pale meadow was often an essential part of a former convent. Very early it was discovered the power of oxygen for bleaching linen “After washing the linen was often yellowish and the smell of the use not get out. By spreading out on the lawn and let it dry linen was under the influence of the sun a fresh scent and a white color. Hence the word ‘bleaching’.

We then strolled through the castle’s park…and saw some chickens along the way.. 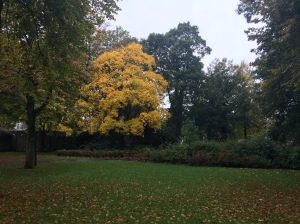 Next we saw what used to be a hospital just on the outside of Breda.  Literally there was a stone wall that surrounded Breda (I was unable to get a photo of what’s left of the wall), and this hospital stood just outside of it.  This particular hospital was used for people who needed caring for, but had severely contagious infections and/or diseases that residents of the city didn’t want to bring within the walls.  After it was no longer a hospital, for many years up until the 1950’s it was used as a old folk’s home for men.  Hence the statues of the elderly men in the front of it now.  Since the 1950’s, it has been turned into a museum.

The white building in the photo below is the place where family could stay when they had family members in the hospital.  It is just to the left of the building pictured above.

Down the alley way above is a very cool little jazz cafe (it has yellow doors).  Breda hosts a huge jazz festival every year in the summer. 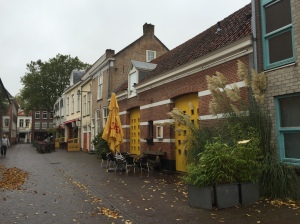 We walked some more… 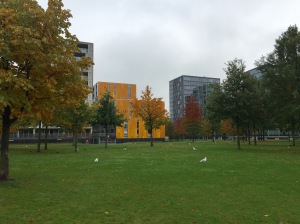 This casino is nearby town hall (Gemeente).  It always strikes me as funny and odd as it is connected to an old convent.  When they built the casino, they were not allowed to touch the convent building itself, so they built the casino around it.  So the red brick building on the right is the convent, and the new, modern metal building is the casino.  It doesn’t look like they are touching in this photo because it’s a bad angle, but they are.

This is where military barracks used to be… 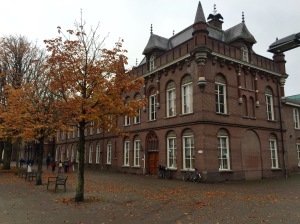 Walking back into more of the city center. There is a movement to have more art, so you will see walls and buildings with all sorts of graffiti, drawings, and beautiful artwork in them.  This one is just an alley way.  I didn’t get a chance to capture some of the really cool ones.

This was a small cafe/restaurant what was serving stamppot (a stew like dish) and it smelled so delicious!  Everyone was standing outside just breathing it in!  And it was a cute cafe.

As original buildings go…this church is probably the oldest original building in Breda.  Back in the 1500’s, a huge fire took out most of the builds in the city center.  This particular church was left standing because it is made out of stone.  It has beautiful stained glass windows! 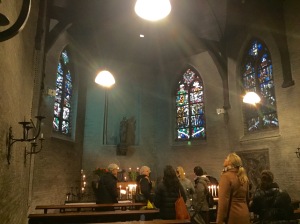 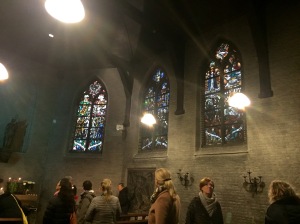 We concluded our walking tour at the Spanish Gate of the castle of Breda. 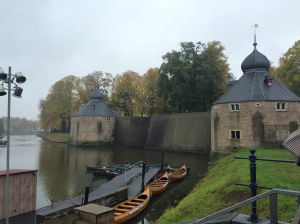