We sailed into Invergordon pretty early, as it is not too far from Kirkwall.  We had a long port time here from 7:30am – 8:30pm!!  I had booked an excursion for our day here through Invergordon Shore Excursions.  The particular trip I booked was a cheaper alternative to the much more expensive Disney version.  Plus we had a private guide and car, so could tweek our plans as needed throughout the day.

I HIGHLY recommend using this company.  Our particular guide was Allen, and he was just great!  Full of knowledge, and a joy to talk to.  But he also left us time to do and explore things on our own as well, which was really nice.

There are really 2 different types of excursions you can take at this port.  One takes you south where you can cruise on Loch Ness, and see Inverness, Urquhart Castle and Cawdor Castle.  The excursion I chose to do was North and we saw the Cathedral of Dornoch, Dunrobin Castle, saw a Falconry show at the castle, the Falls of Shin where you can see salmon jumping, and tour a Highland Single Malt Whisky Distillery.

We met Allen (the website provided great instructions on how to find their guides in the port!) and set out for the day.

As we made our way up to small town of Dornoch to see the Cathedral, we passed through the countryside, which was beautiful.  If you paid attention – you could see ruins of some sort everywhere you looked.

Saw some Highland cows too!

We arrived in Dornoch, and immediately you could see that the town had that old-world feel to it.

We made our way to the Cathedral, which was built in the 13th century.  Technically, as this church is of the Church of Scotland, which is Presbyterian, the church is not technically a cathedral, in spite of its name.  It also had a cemetery around it. 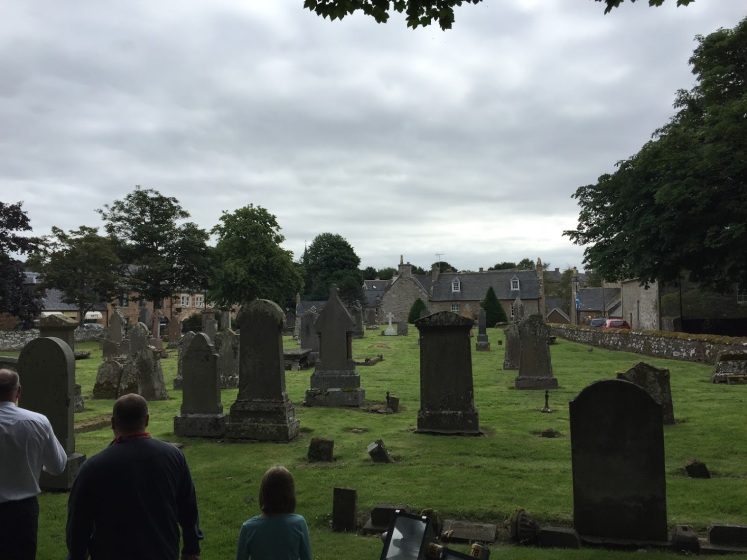 This stone was used by a tailor to measure lengths of cloth and fabric in the market – in this exact spot!! 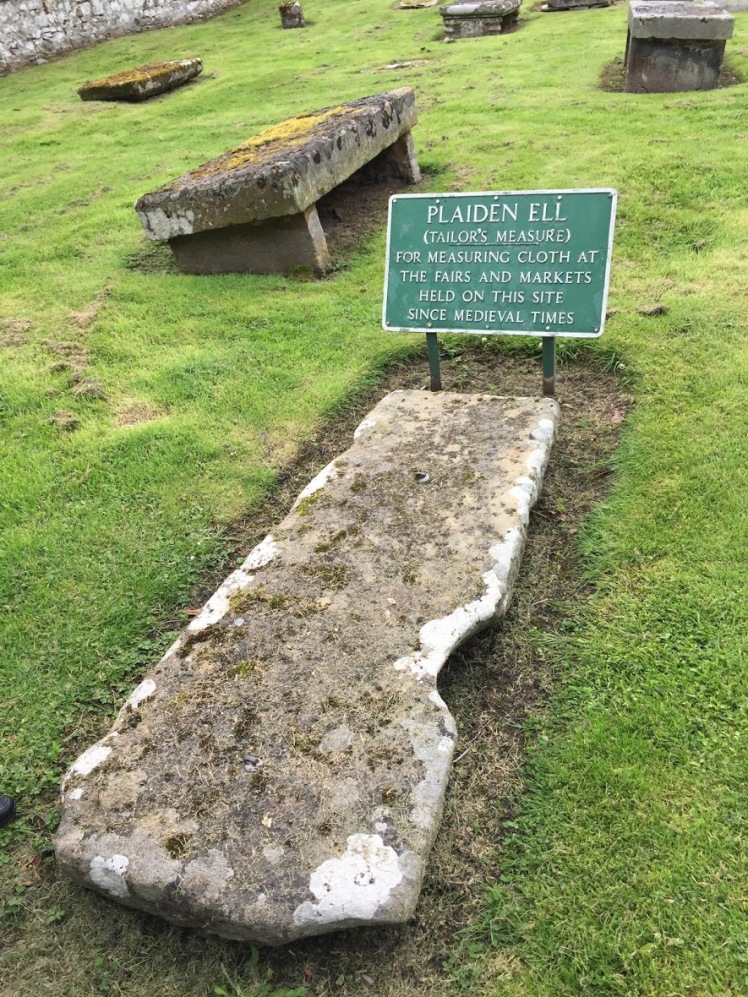 Then it was time to see the inside of the church.  It was smaller than most of the other churches and cathedrals we have been to, but just as pretty and ornate with beautiful detailing. 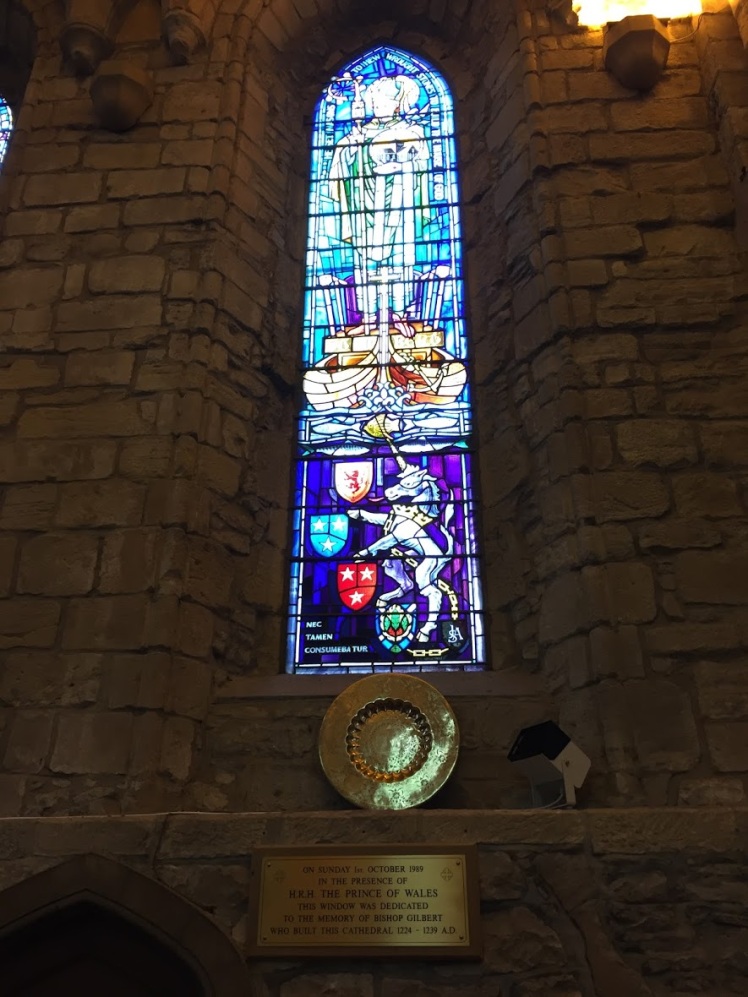 This was a house on the church grounds that was just lovely.  I’m not sure if a member of the church lived there currently or if it was a private residence.  I just really thought the house and surrounding garden was beautiful, so snapped a picture!

Directly across the street from the church was a building that used to be the jail.  It is now a retail shop!  But they kept the architecture both inside and out the same.  I asked if they made a new jail to replace it, and Allen said that they had NOT, that one really hadn’t been needed!!  How awesome is that?!  We purchased a book about Scotland here as our souvenir! 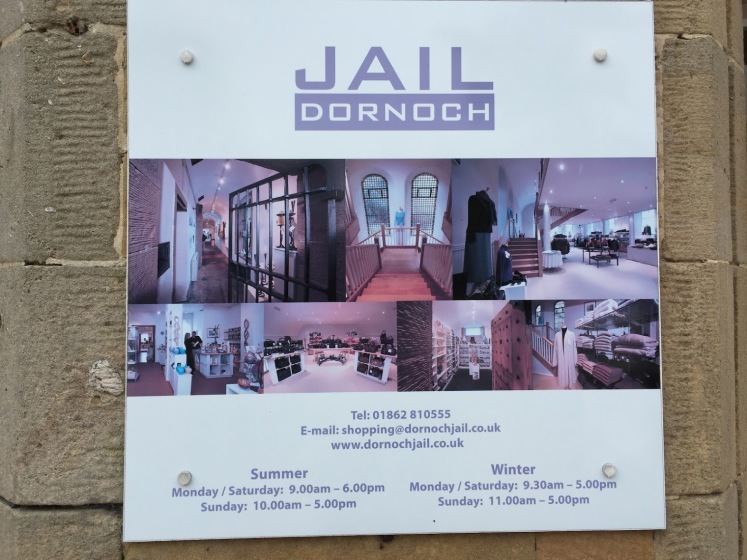 This is one the cell rooms –

We left Dornoch and headed for Dunrobin Castle.  We were making good time, and actually were a bit early.  So Allen suggested we stop nearby at a Broch ruin, which had been around since the Iron Ages.  These brochs are only found in Scotland.  There is some confusion as to what they were used for exactly.  Some think they were for defensive purposes, while others believe they were used as farmhouses.  We may never know, but it was really interesting to see! 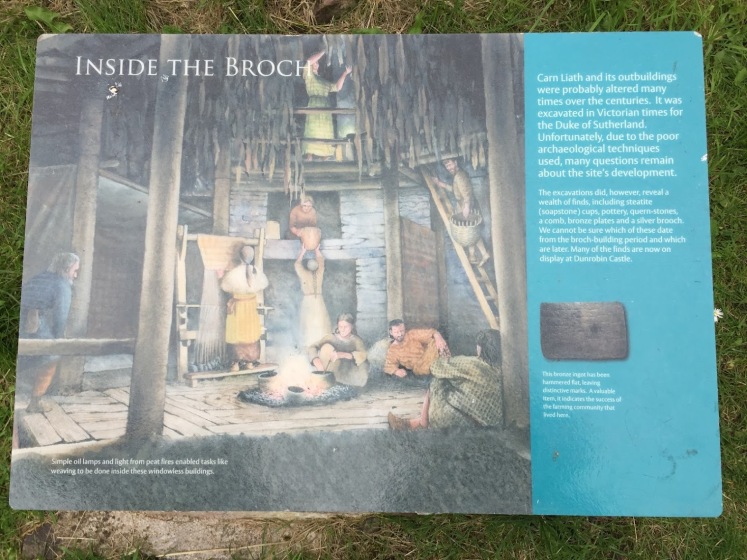 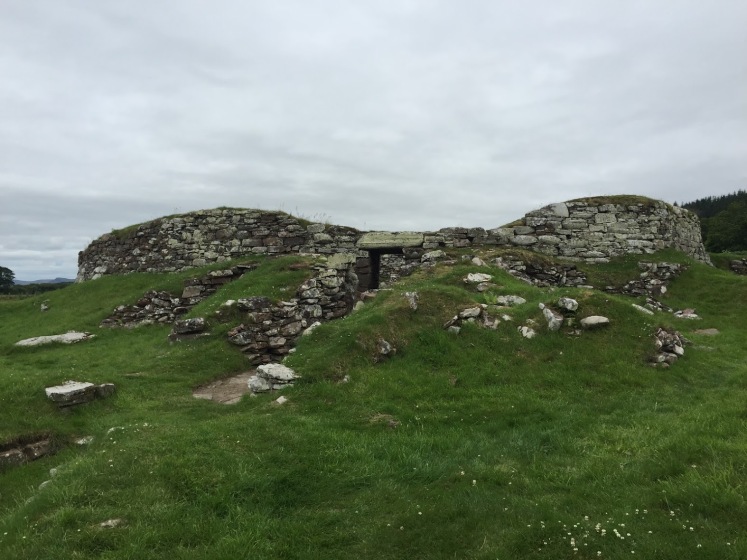 It was time to head to Dunrobin Castle as we had a set time to see the falconry show.

Once we went through the castle, we wandered around the gardens until our falconry show started.  The grounds were magnificent! 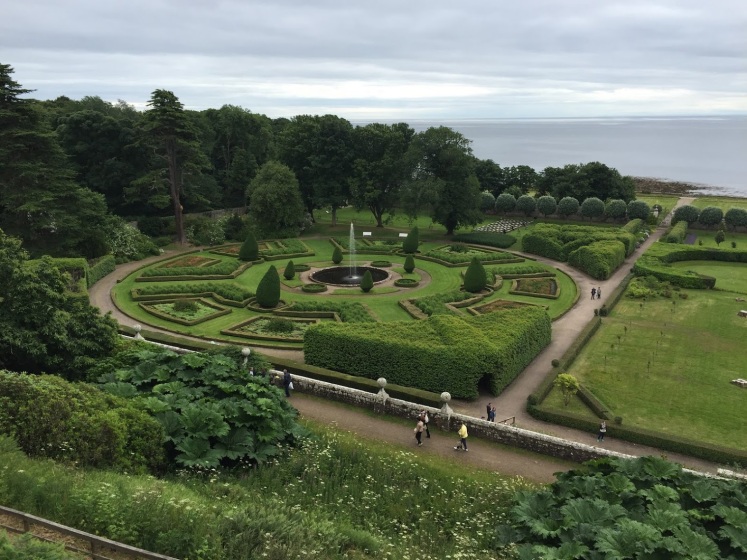 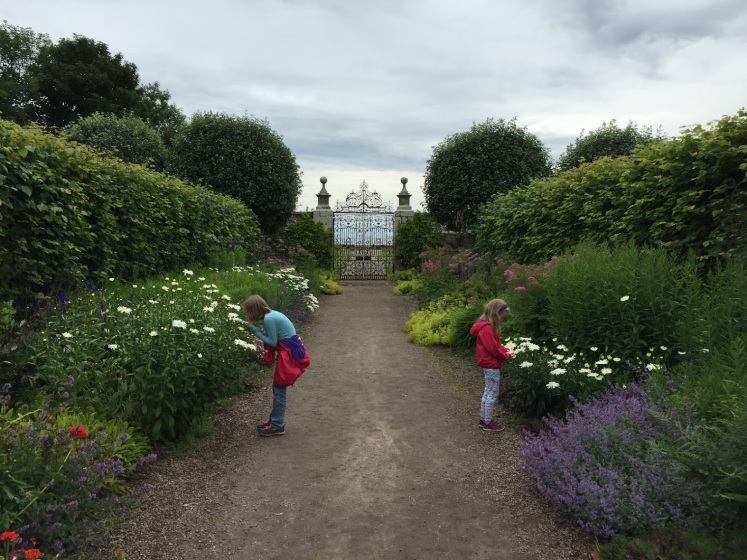 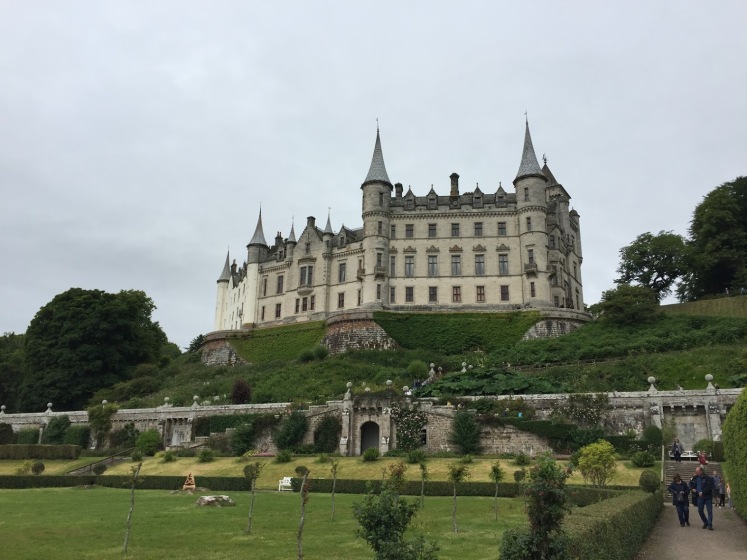 Then it was time to watch the birds in action!  It was hard to get video, but the show was really cool.  He had falcons, hawks, and owls that he demonstrated, and he talked about how he teaches and rehabilitates his birds. 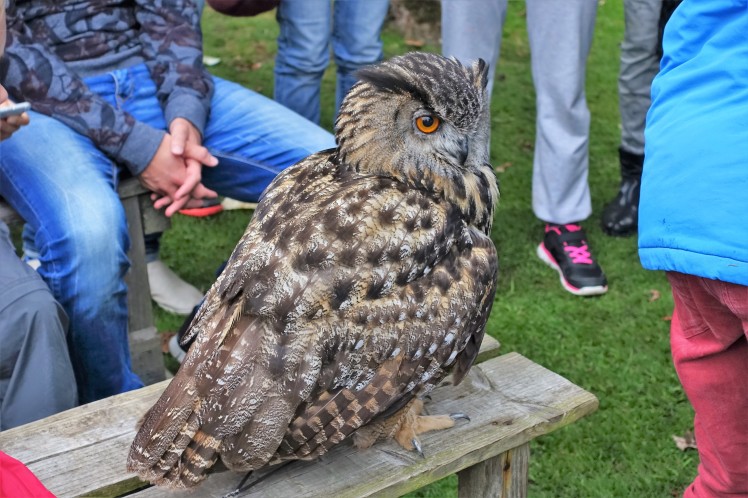 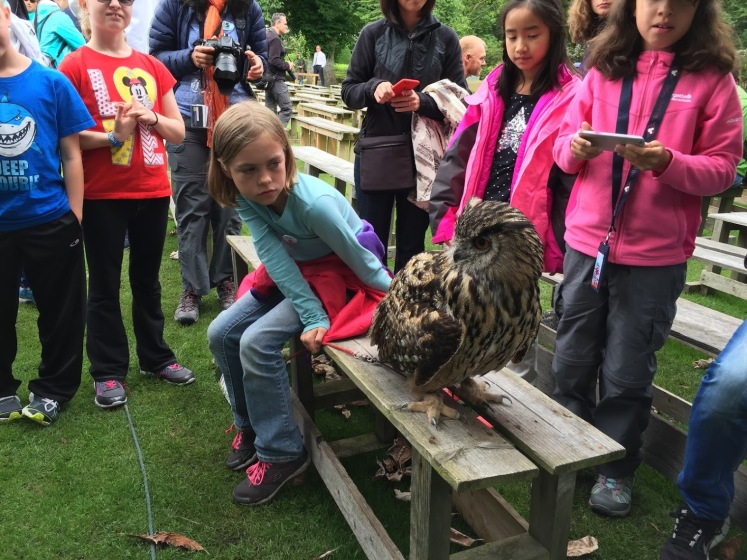 After grabbing a bite to eat at the castle, we headed again back into the countryside.  We passed some neat looking houses along the way. 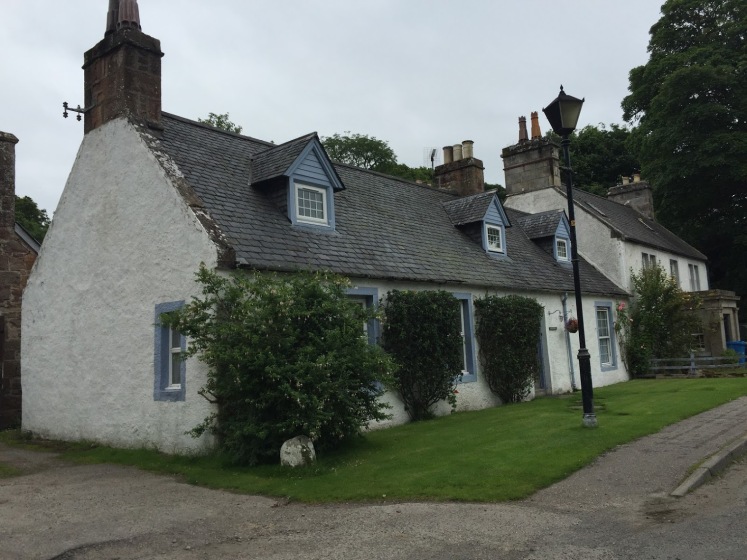 We drove up into the hills on our way to Falls of Shin and stopped for a great view!

I wasn’t able to capture a still photo of a salmon jumping, but do have some video of it.  Once I get it edited, I will upload it here.  But this is the river the salmon go up, and the rapids area on the right side are where they jump up to get to the next tier of river bed.  It’s amazing to watch because the water is flowing SO FAST, and you just think, how can these little fish have so much energy and strength to be able to 1. swim against the current to begin with, and 2. be strong  and fast enough to be able to jump against the current!

After watching them for a while, it was time to head to the distillery.  To prepare, our wonderful guide Allen, had a treat for us!  He did NOT partake – but Brett and I tried it! Allen had 2 different whiskies that we tried. 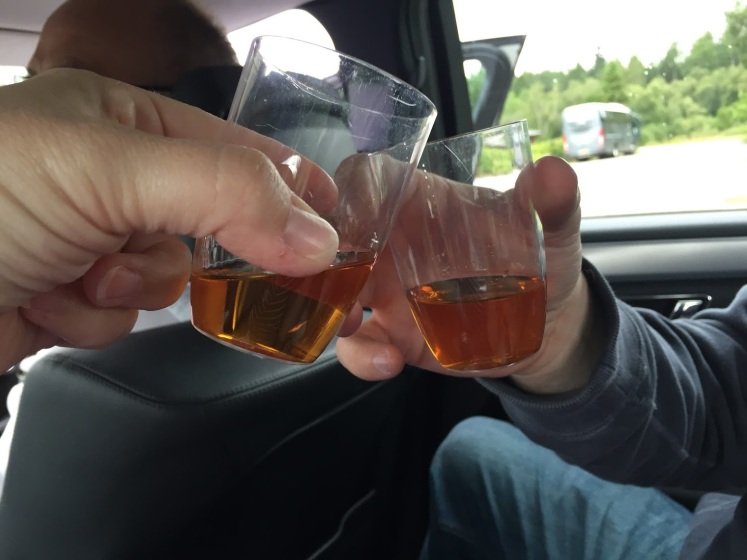 Then we got to Glenmorange Distillery and we took a tour.  Due to the high alcohol content in the air in the distillery, cameras and phones were not permitted because a spark of any kind could have ignited the air.  So I only have photos of the outside of the place.

We had a wonderful day driving around a bit of Scotland, learning about it’s history, people and places.  I would love to go back one day and see much more of this beautiful country!!

We had a sea day the next day with our final destination of Dover, England the following morning.  It was sad realizing our amazing vacation was quickly coming to an end.