I can honestly say I don’t think I’ve taken as many pictures as I did in our 2 days in Venice!  I’m not sure why.  From the outside looking in – all of the pictures could pretty much look the same: old buildings, water, and boats.  But Venice has such a cool vibe to it.  It’s SO old, yet SO unique…Unlike any other city we’ve been to.  It definitely ranks high up on my list of places to visit if you ever get a chance!

Venice is actually made up of about 118 islands, and has about 114 churches!  These islands are all connected by canals and bridges.  No cars are allowed on the islands.  There is a large car park where you can keep your car if you want to drive it to the main land.  There’s also a 4km long bridge that connects Venice to the mainland and you can cross via car, bus, or train.  The buildings of Venice are constructed on closely spaced wooden piles. Most of these piles are still intact after centuries of being under water. The foundations rest on plates of limestone placed on top of the piles and buildings of brick or stone sit above these footings. The piles penetrate a softer layer  of sand and mud until they reach a much harder layer of compressed clay.  Because the wood is submerged, it does not decay as rapidly as it would above water.

We like to book at least 1 type of guided tour of a city we visit for the first time, mainly to get to know the history of the city and to see some sites that are off the main tourist path.  MyMan and I prefer to go to where the locals go, eat where there locals eat, etc.  You tend to find better food and better merchandise (that’s usually cheaper!) when you visit the lesser taken paths.

I found a company that had availability for us on Saturday called Friend In Venice Tours.  Our guide was Nadia, and she was really amazing!  She immediately took to the girls, and they liked her too.  The tour was 2 hours of walking around Venice, followed by a 1 hour boat tour on the canals.  Nadia showed us some interesting things along our paths.

We started our walking tour just going through various street.

This is a place where they build gondolas from scratch.

It’s interesting walking by the canals.  They are almost even with the walkways. 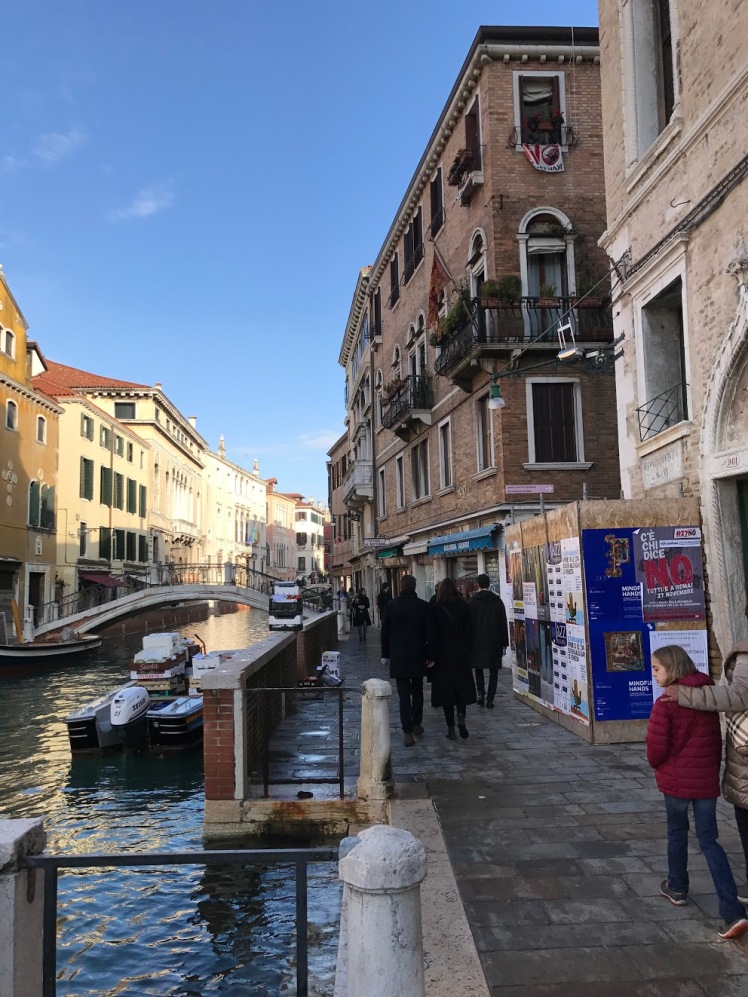 This was an art gallery.  Before clothing factories, they had seamstresses who used these dolls to model clothing.  That way, they only had to make 1 small version of a dress.  If a customer was then interested in purchasing the dress, the seamstress would take the person’s measurements and then make a custom order for them. 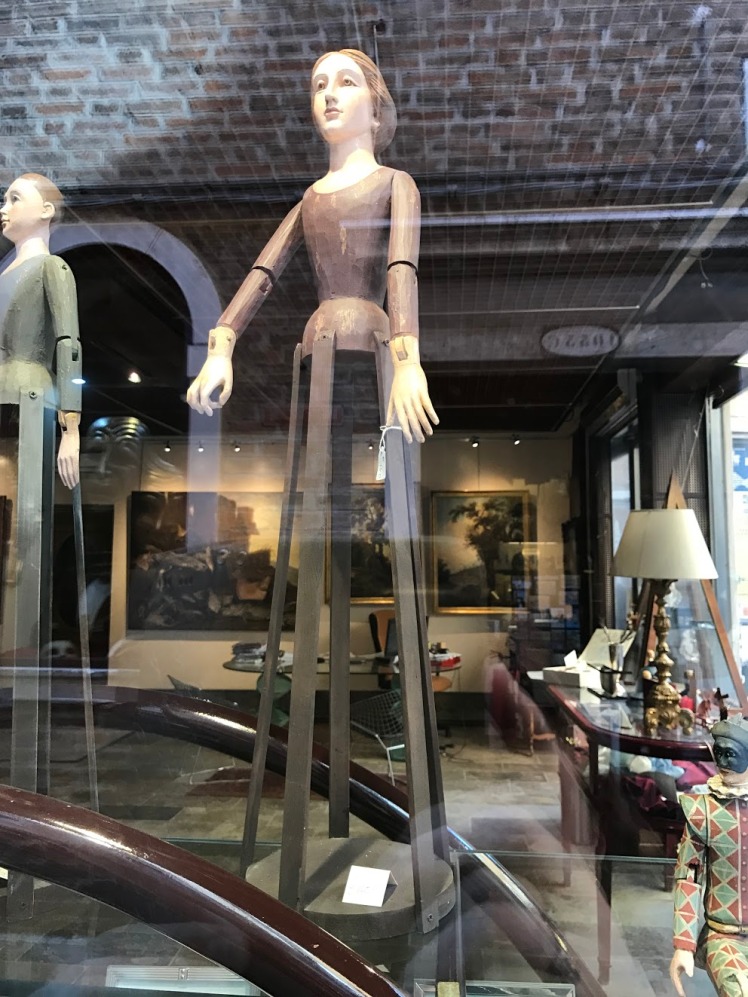 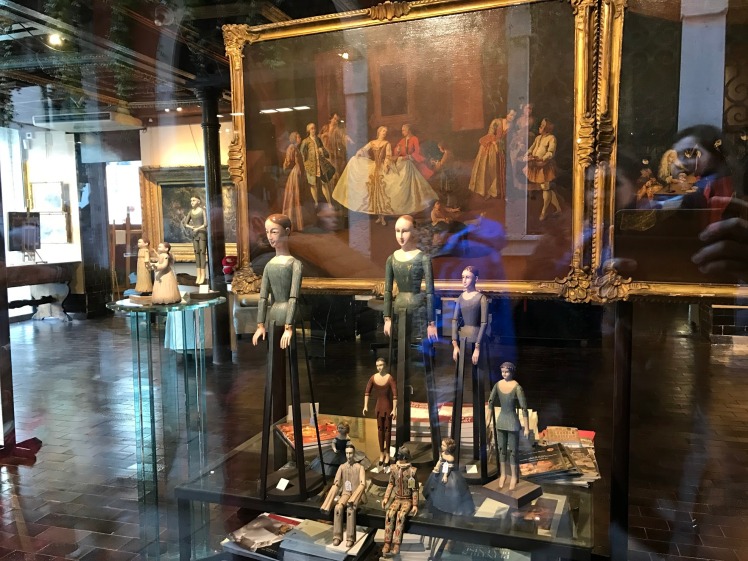 Venice had an interesting compilation of building styles and colors.  Some buildings were very vibrant and bright, while others were more muted or white.  Most everything looked like it could use a good power washing!

You can find these slanted things in the hidden corners.  They were designed to keep people from hiding in the dark corners where they could jump out and steal your bags and rob you, etc.  They are extremely steep and you cannot stand on them, or you just slide down.  Once we knew what they were, the girls spotted them everywhere! 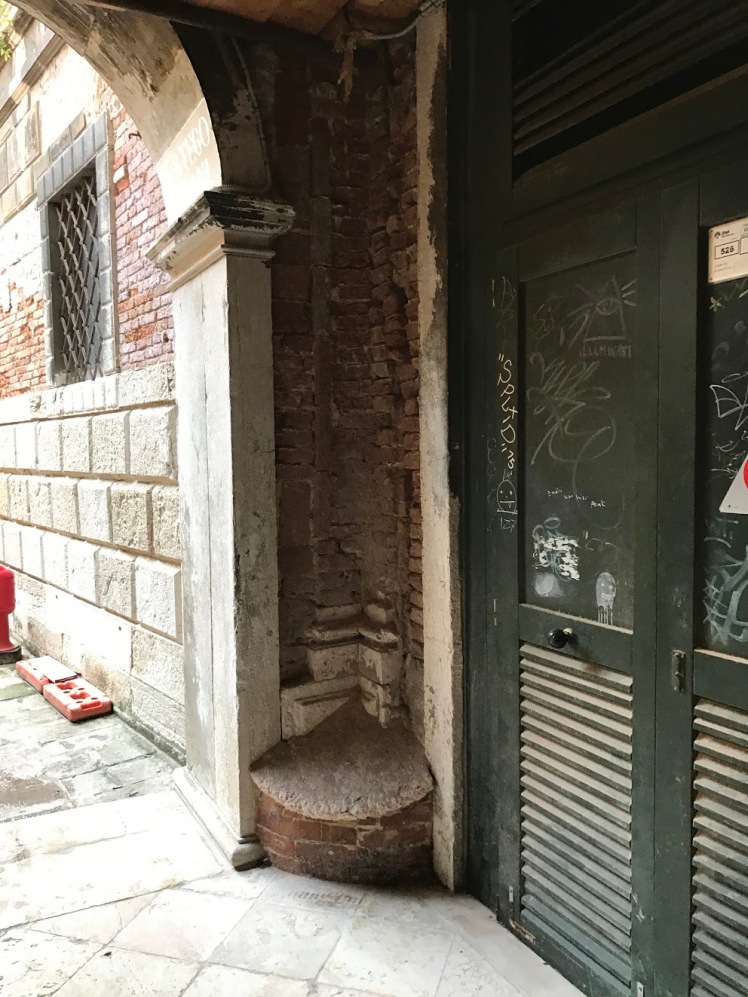 As you can see, on this morning, the tide was high enough to come over the walls and onto the walkways.  About an hour after this photo was taken, it was back down to normal levels.  You can see the raised planks on the right of the photo – when the water is particularly high, they use these planks to walk on to stay dry.  Also, they sell water boots most Venetians have for just this purpose.

After walking for about an hour, we stopped at the hotel Palazzetto Pisani for a rest and a coffee.  Below is the front door of the hotel, where a water taxi drops you off.  (We went in via a side door).

Oldest waiting for her hot chocolate.

I loved the tiled mosaic flooring in this room! 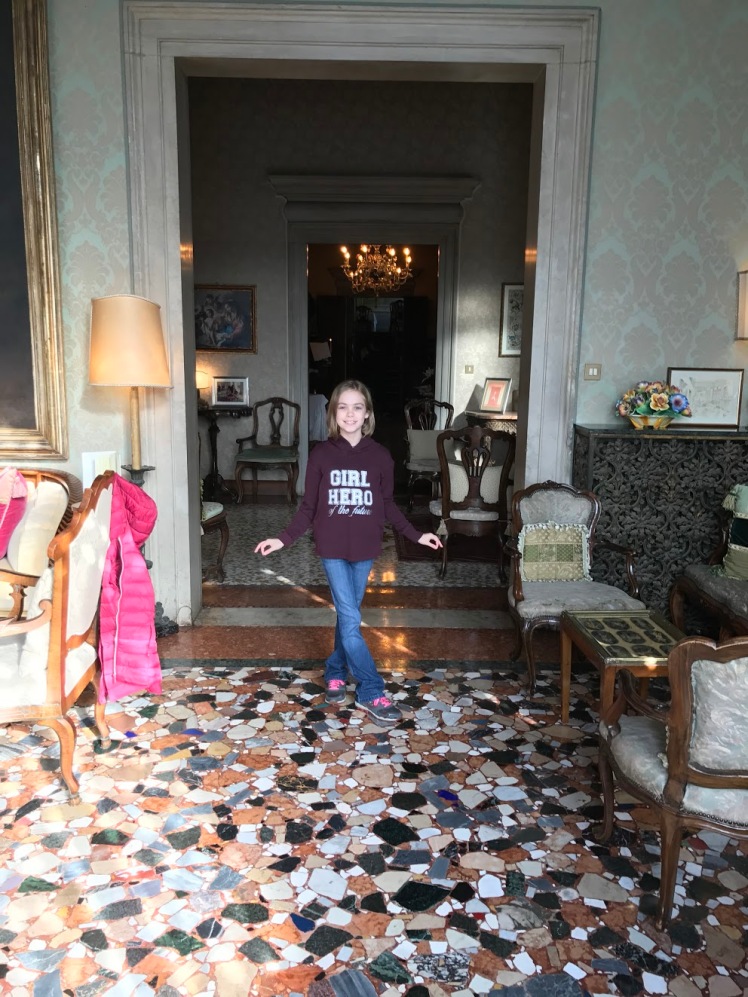 Littlest sitting out on the balcony watch all the boats on the Grand Canal.  The glass windows in this hotel are very interesting.  The round circles are actually all individual bottoms of glass bottles.  Many buildings have these in their windows because it allows light in while giving privacy, and in case one of them breaks, it’s much easier to replace 1 or 2 pieces than an entire pane of glass.

Nadia took a beautiful picture of all of us on a balcony of the hotel over looking the Grand Canal.

A gondola team practicing their rowing.

After our coffee break, we got a little tour of the hotel.  We found out that the family that owns it, still lives in it.  This hotel also has a long guest book that includes names such as Hitler.  Bill Gates also has stayed at this hotel. 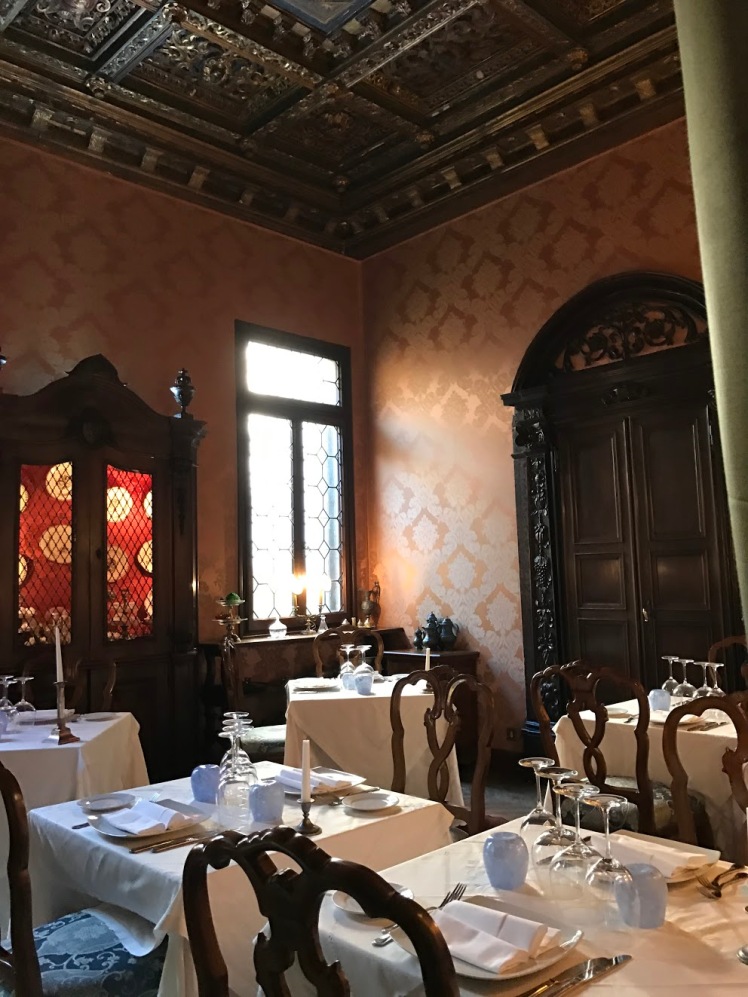 The ceilings were amazing.  They were all different!

We left the hotel and continued our walking tour through Venice. 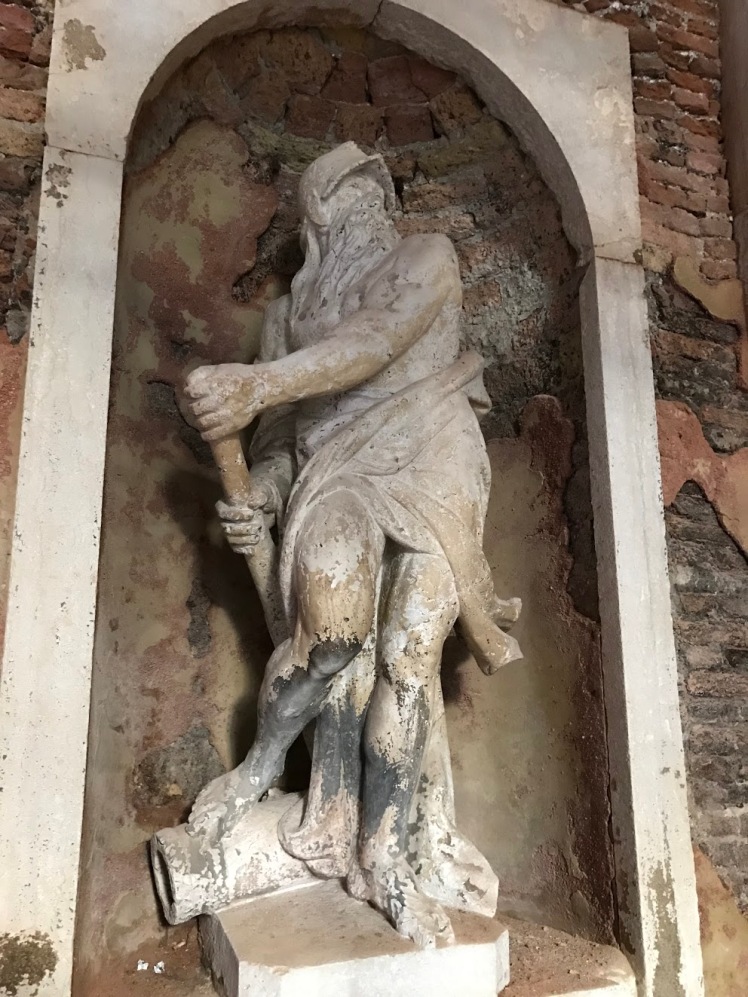 The structure where MyMan and the girls are standing (on the left side of the picture) is a well.  You can actually see them in quite a few of my pictures.  These are actual well that the Venetians used for their drinking water.  Venice only got water from a tap in the last 75 years or so.  Before that, it got water solely from wells.  The rain water was filtered through sand before ending up in cisterns to be collected.

They have these little water fountains all over the city.  They usually have bowls there as well – mainly used for people walking their dogs.  But the water is totally drinkable. 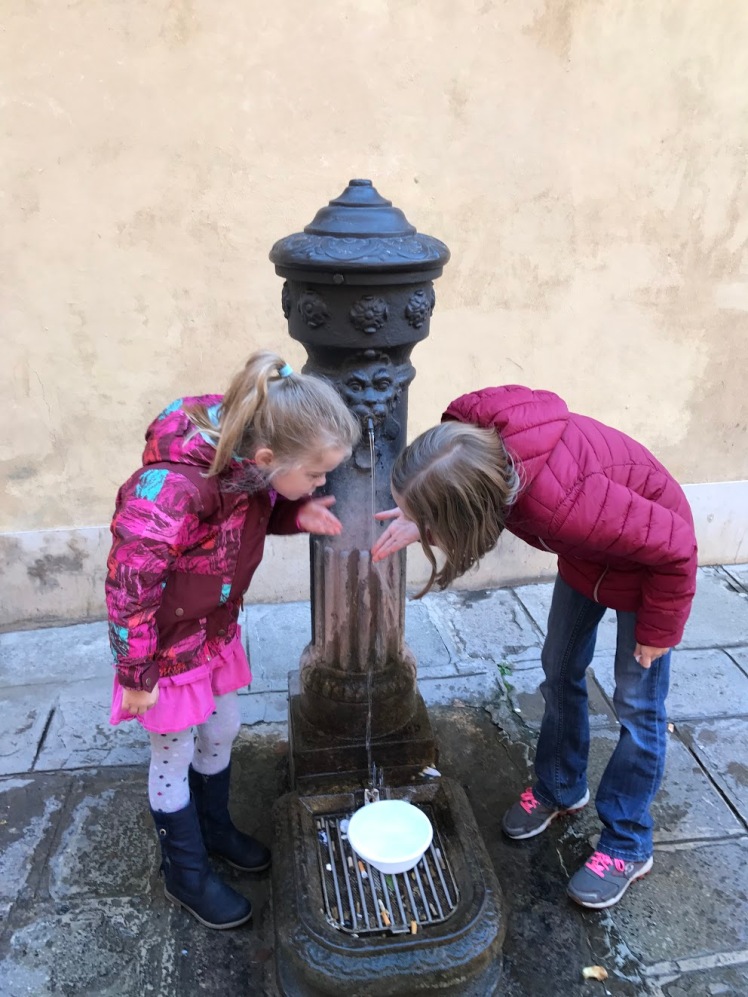 There is only one “square” – Piazza San Marco (aka San Marco’s Square).  But all of the islands and little areas have their own small squares called Campos.  Each Campo was the place in the neighborhood where you could go to the market for food and supplies.  This is a Campo. 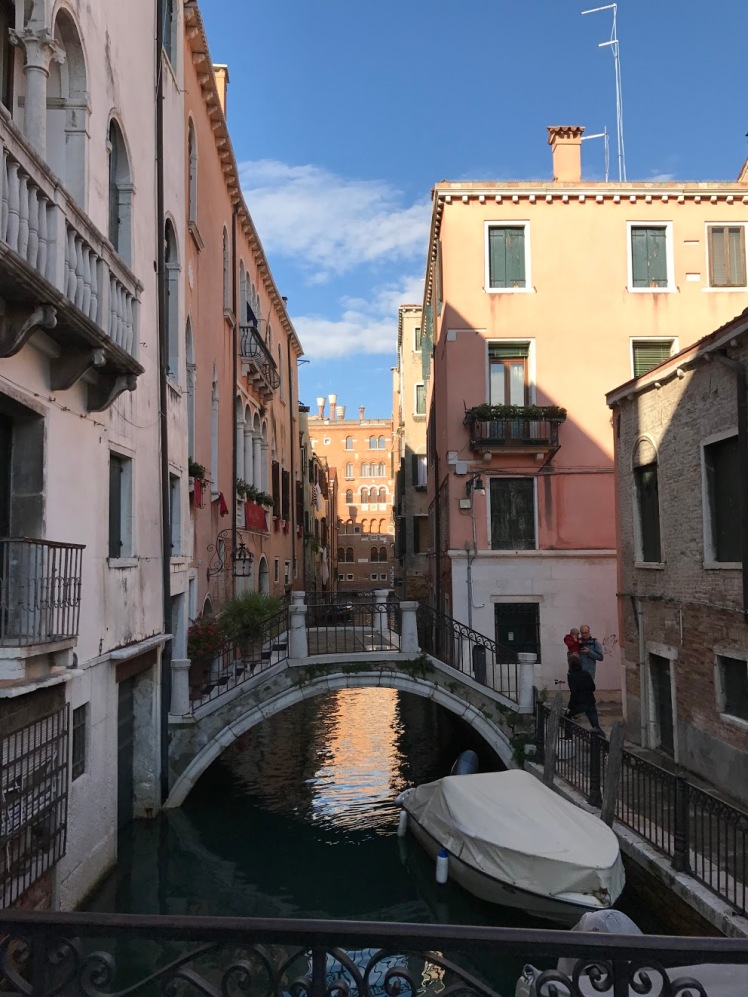 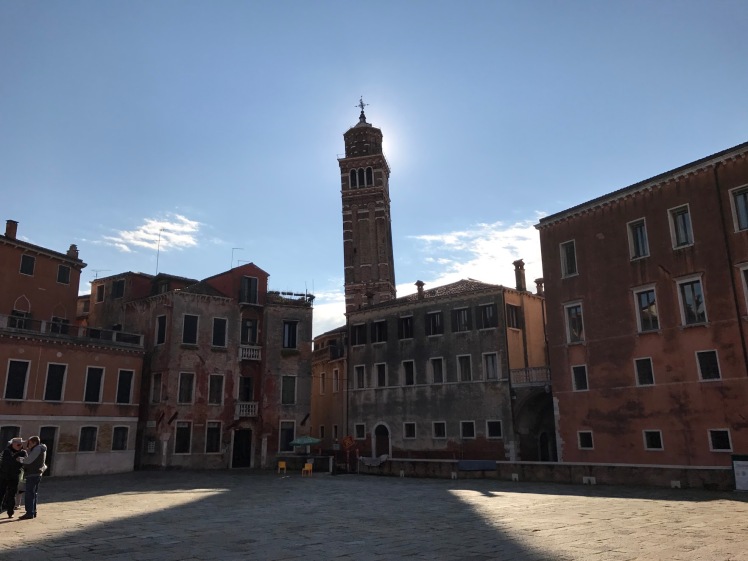 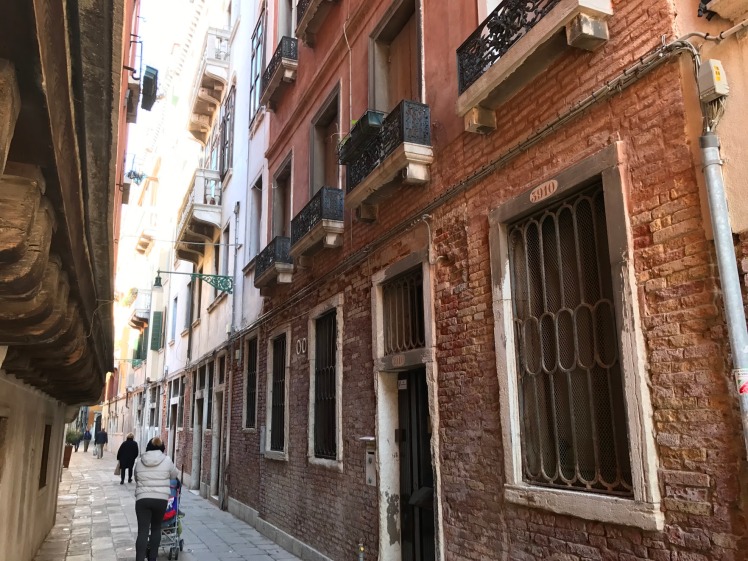 The walking part of the tour was over – it was time for the canal tour! 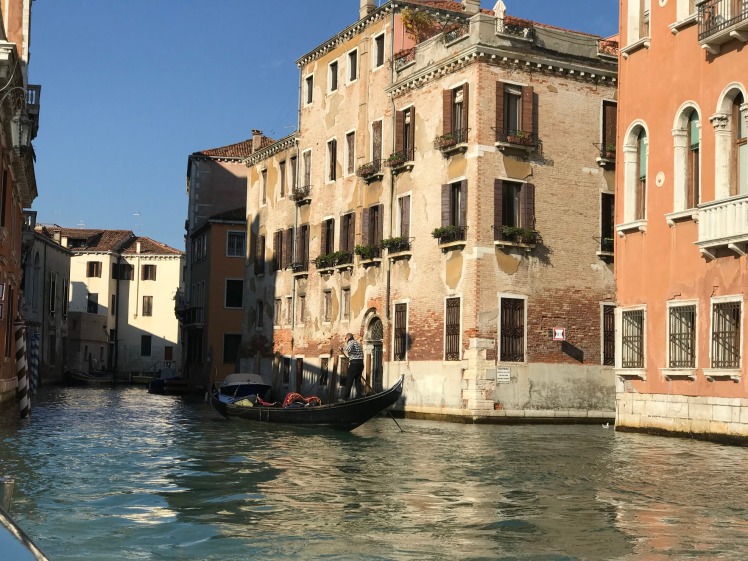 The buildings just look so OLD! 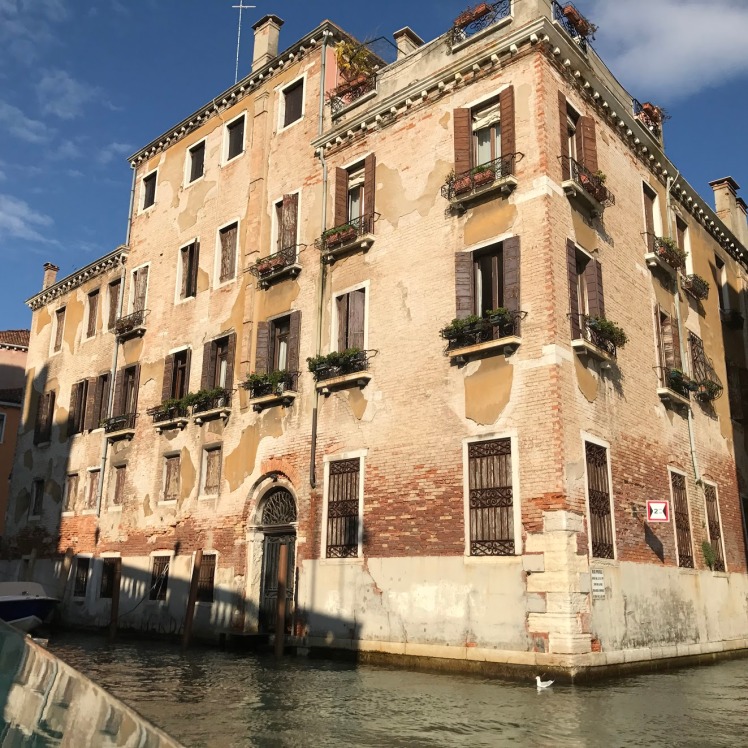 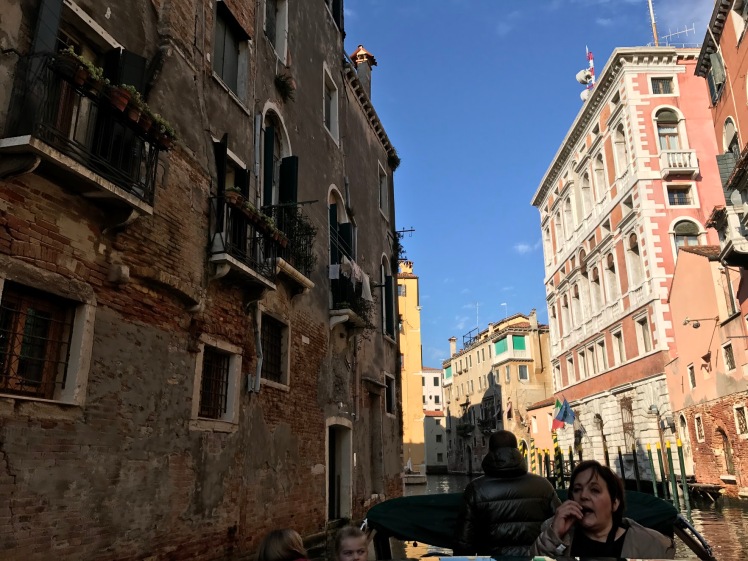 There are 200+ bridges in Venice.  And the drivers need to know which canals they can go down based on the size of their boats!

Some bridges are extremely low!

Check out the Gondola going under the bridge! 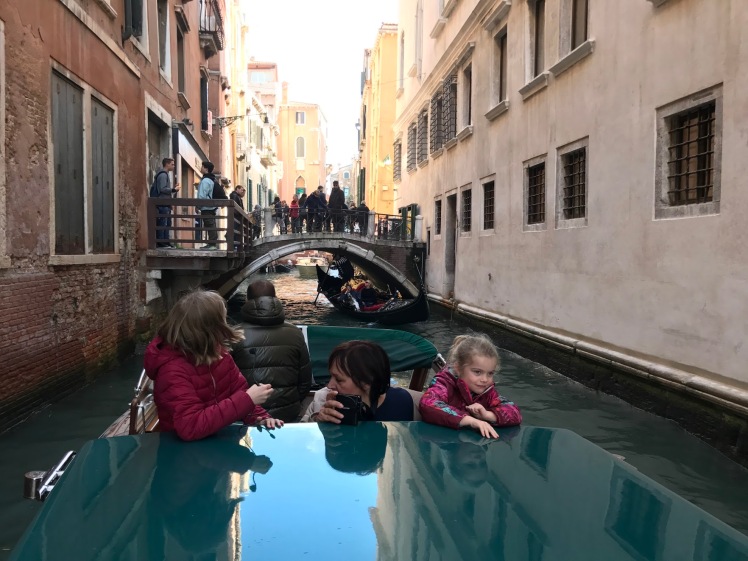 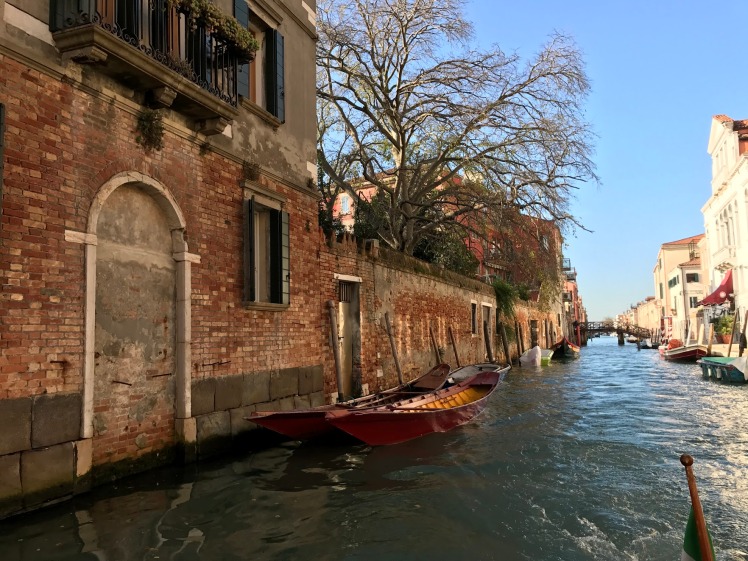 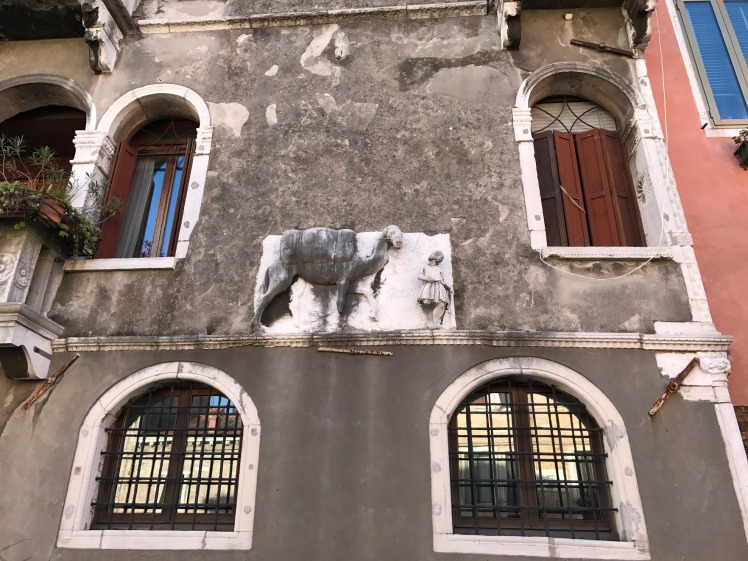 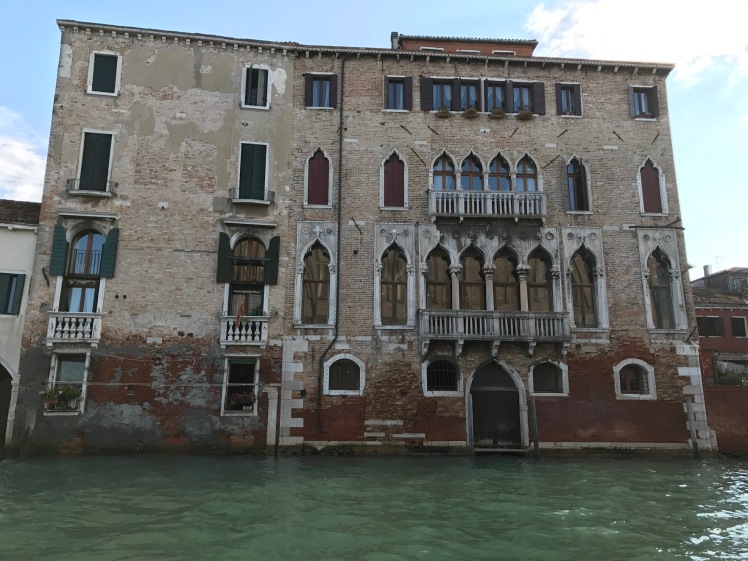 Nadia let both girls talk on her PA system – which just thrilled them to pieces! 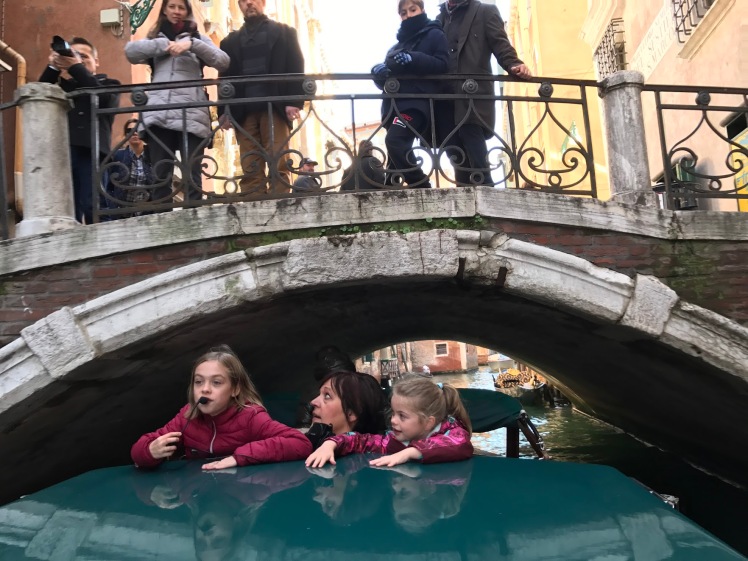 The amount of boat traffic on these canals is amazing!  Small boats, gondolas, kayaks, water taxis – and they all seem to get along! 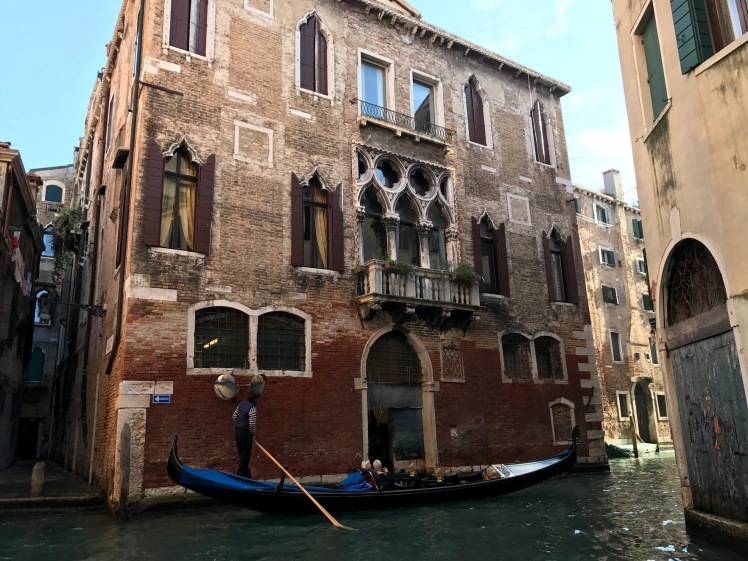 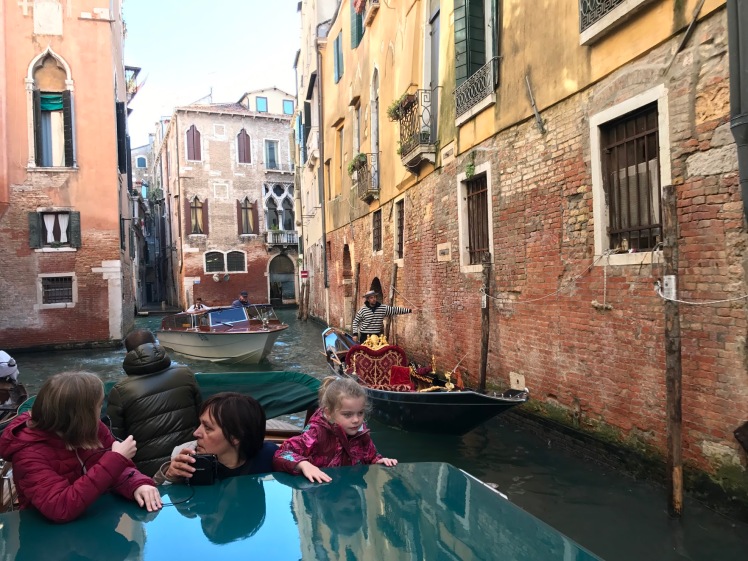 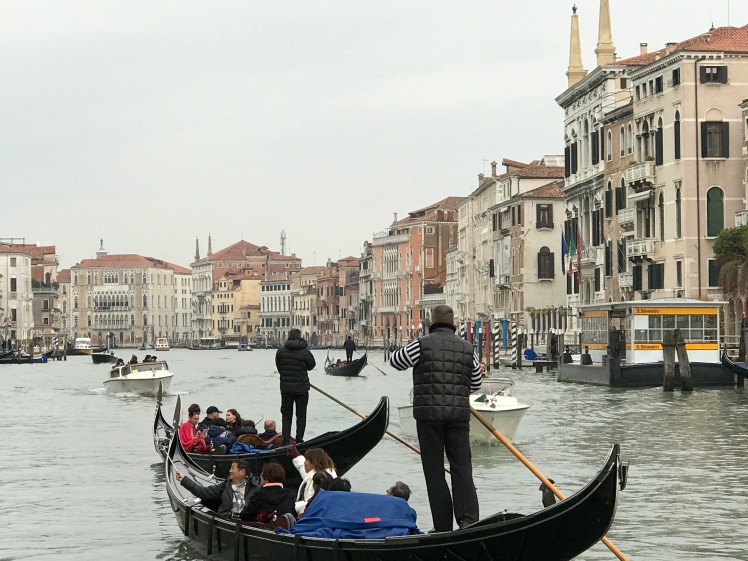 The Ambulance Boats outside the hospital. 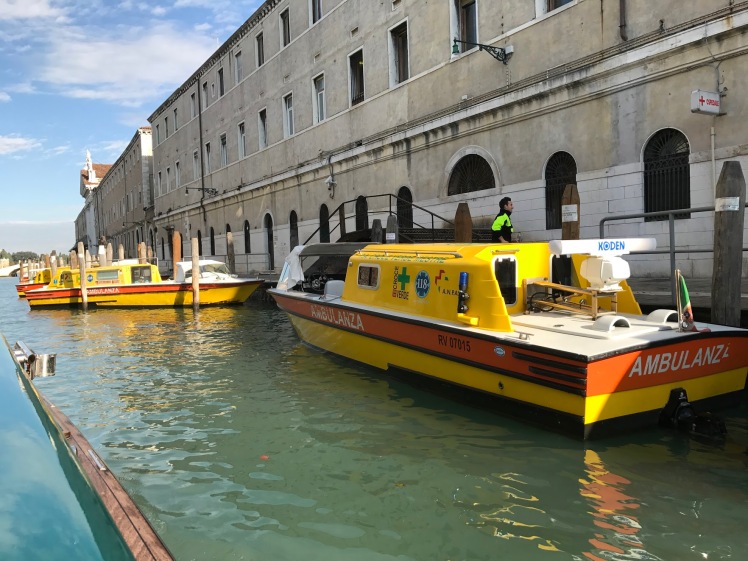 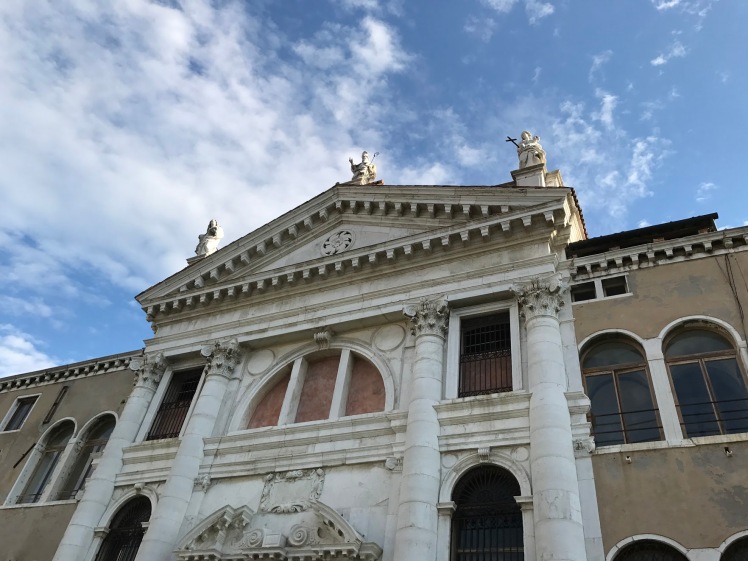 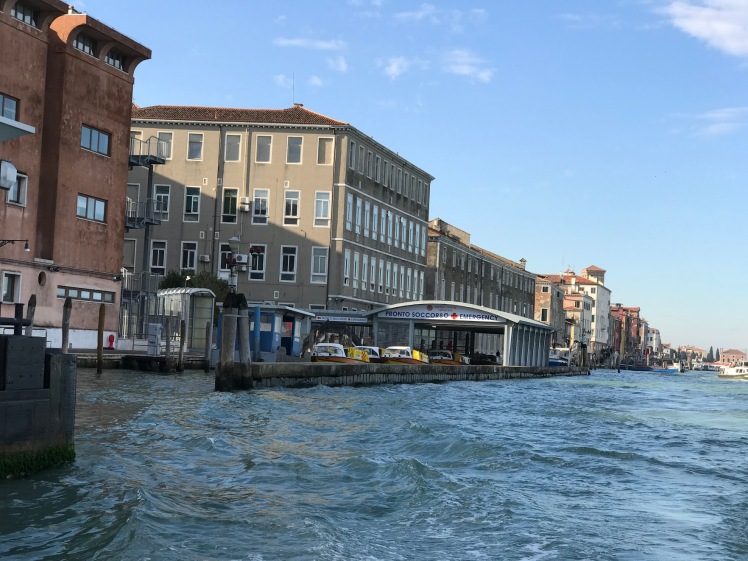 And there’s also a helipad on top of the hospital.

Across the water from the hospital is the cemetery.

Can you see those beautiful snowcapped mountains off in the distance?

And there were definitely some buildings that could some paint and TLC. 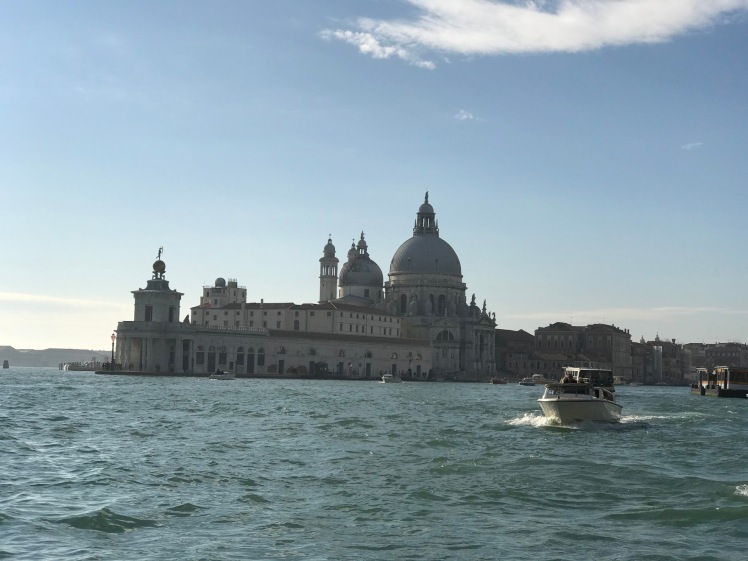 Coming into dock the boat at the end of the tour, and we ran into some boat traffic.

A quick, sped-up video of the last part of the canal tour.

We really enjoyed our tour with Nadia.  We learned some things about Venice, and we saw some great parts of the city that most tourists don’t.   It was early afternoon so we decided to walk around about in San Marco’s Square. 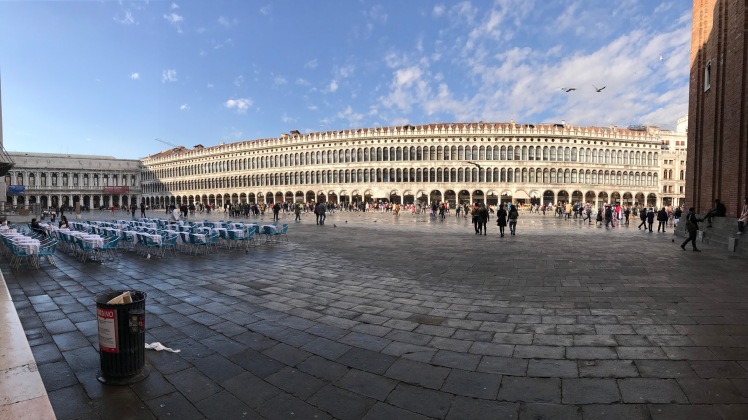 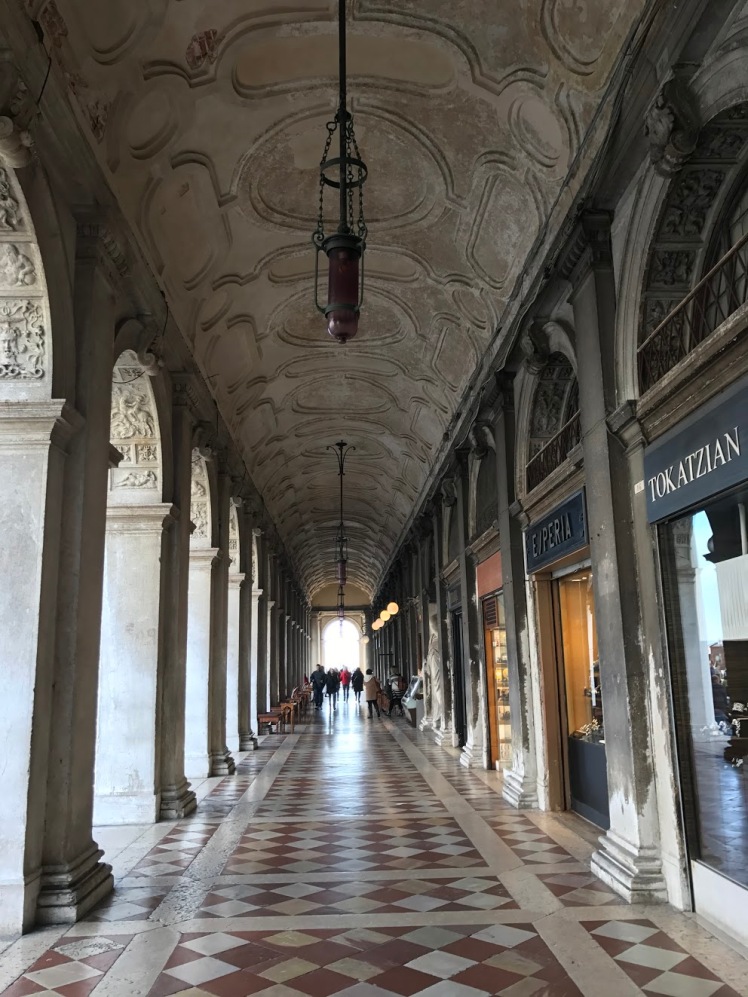 Back in November of 1966, the tide water level was a record breaker! 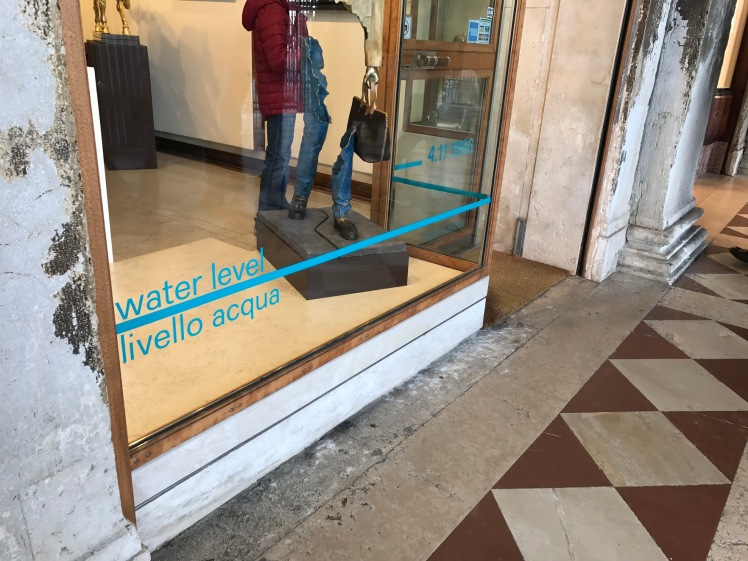 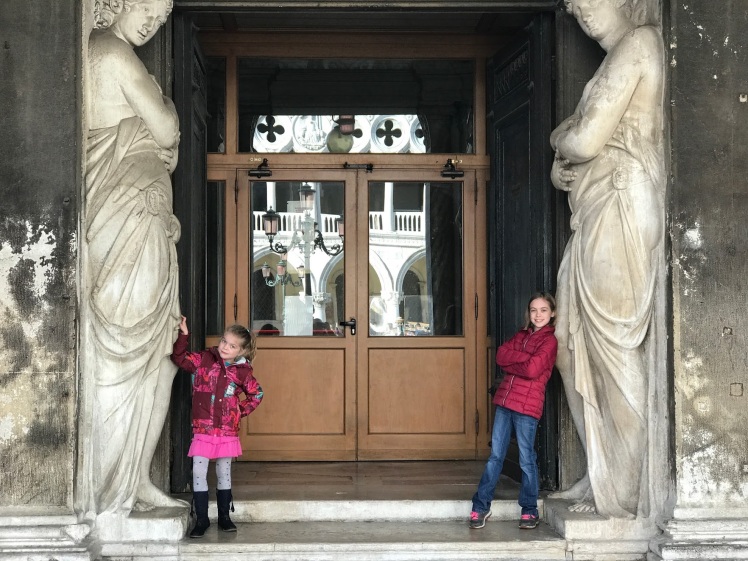 We had a great time in Venice!  We didn’t have time to explore everything, but we will be back in May so we will get to do some of the things we missed this time around.  Can’t wait to go back!